Nobody likes to be rejected. Not by a friend, not by a job, and certainly not by a literary journal. The good writing gods know I’ve received my fair share of rejections to stories I wrote and loved and believed in. But as the fiction editor here, it’s also my responsibility to dole out rejections–a lot of them. It gives some credence to that old saying, ‘you get what you give.’

So what goes into deciding what stories to reject, and how to reject them? Here at IR, we get about a hundred fiction submissions a week. At our fiction meetings every two weeks, we discuss an average of eight stories. But in our upcoming issue, there is about one story for each month’s worth of submissions. That means that for each story published in Indiana Review about four hundred were declined. 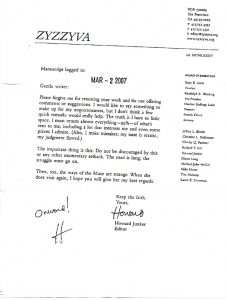 “The road is long; the struggle must go on.”

Sadly, many of these rejections are sent to really fabulous writers. Many a story we don’t take is truly compelling. But maybe it’s about a subject we’re not familiar with, and we’re just not the right editors to judge it. Or maybe our reading committee gets to talking about it, and for whatever reason–an inconclusive ending, a passive protagonist, the members of the group–we all decide that it just doesn’t seem quite right for publication. I’d like to say the selection of work for our journal was an airtight scientific process that allowed all the best cream to rise to the top, but the truth is it’s messy, inconsistent and difficult. Howard Junker at ZYZZYVA pretty much summed it up in this 2007 rejection letter, where he wrote, “I must return almost everything–99%–of what’s sent to me, including a lot that interests me and even some pieces I admire. …I make mistakes; my taste is erratic, my judgement flawed.”

I know from experience how harrowing the process of allowing your story to be read by a stranger’s critical eyes can be. I’d love to be able to write an encouraging, thoughtful note to every fiction writer who’s brave enough to send us his or her work–and I do try to include a personal note whenever possible. Whatever I say, though, it’s up to the writer to decide to persevere in the long, brave, solitary battle that is the practice of writing, and to take each rejection as a “momentary setback.” As Howard Junker writer, “The road is long; the struggle must go on.”