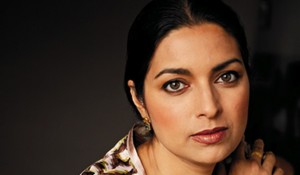 When I was seventeen, I read Jhumpa Lahiri’s The Namesake and finally felt understood.  Like many children of immigrant parents, I was never sure what to make of my identity.  Indians my age called me out when I tried to ignore it, claiming that I didn’t care about the country that nurtured my parents.  When I gave it my full attention, I felt close-minded and not myself.  After reading The Namesake, I thought through and wrote about these issues in ways I hadn’t before.  I kept a response to the book tucked inside the pages.

At this age, a life without Jhumpa Lahiri would be a completely different life.  Two days ago, I drove up from Bloomington to Indianapolis to see her talk, feeling reluctant the entire drive.  Her writing has affected me in such intimate ways and I consider her my favorite author, yet, I didn’t want to see her.  Over the past year, I’ve began to take writing more seriously and as a developing writer trying to find stories to tell, I’ve distanced myself from her.  Whenever I reference a story of hers and try to write my own, I know that she snatches my pen from me and writes with her own voice.

At the reading, the lady sitting next to me looked giddy.  We started talking and she, too, felt all sorts of confusion with her family origin.  It made me think of how often I don’t have these sorts of conversations.  When I told her I had forgotten to bring a book to have signed she told me that she had brought all three.  They’re all so important to me for different reasons, she said.

The room continued to fill and people made do by sitting on the floor along the walls when there were no vacant seats.  I had never seen such excitement around a writer.  As Lahiri began to speak, I thought how strange and nerve-wracking it felt to listen to her voice, which traveled directly to my body, separated by only a small space of air, rather than finding me through a set of headphones, or through letters on a page.

When the question and answer session began, a younger boy asked, “Who would you talk to if you could, alive or dead?”  I expected her to say Chekhov.  I think she almost did because she responded, “I would say one of the writers I admire, but maybe I wouldn’t actually want to meet them.  You come to know a writer through their work in a different way than you do a person.  You may be noticing that now.” She went on to say that she would talk to her grandparents who she never knew that well, considering the mystery that surrounded her family history.

A man asked why all Indian couples in her stories appear unhappy.  Is there a reason for that?  I saw an Indian woman in the audience turn to her Indian husband with wide-eyes, playful and inquisitive.  It was the type of expression I had seen so many times during childhood, the one that encapsulated both the excitement and shame of being foreign.  Lahiri answered the question by giving examples of Indian couples that appear happier in her work.  She eventually said that writers write about problems.  They walk into deep blindness to do so.

One girl asked did writing come to you or did you come to writing?  Lahiri said that she had developed slowly and that in comparison to other writers, she came to writing at a much later age.  There had been reluctance on her part to accept the role of a creative artist.  She worried that it was presumptuous and she worried what taking on that identity would say about herself.  Her answer helped me think through my own problems as a developing writer.  To me, the identity of a writer is another identity I have to fight with and fight for.

When the Q&A ended, the lady sitting next to me pulled out her three books and asked which one I would like to have signed.  What a gift for a person to offer something so meaningful to a stranger.  I picked Interpreter of Maladies, the only paperback she owned of the three.  I asked for her address and promised to send her my own copy.

In line, we were given post-it notes to put on the cover page of the book and told to write our names on them.  Lahiri signed my book quickly and wordlessly, making eye contact at the end.  I squinted at her.  Is this person real, I wondered.  As she handed the book to me, I smiled slightly and said thanks.

This morning, I pulled out my copy of The Namesake.  The pages have browned over the years.  I took out the note that I wrote five years ago, a time in which I could never trust myself to do what was right.  I didn’t have the confidence.  When I read the note, I was touched and shocked at the conviction with which my seventeen-year-old self wrote.  I wrote with an assurance that I don’t remember having at that time.

This sort of strength came from sitting alone in my bedroom and reading a book.  It reminds me why I believe in writing and why our stories must be told.