As the Great Heat Wave of 2012 finally breaks, I find myself able to leave my apartment for the first time in weeks. True, I still sweat when I touch the doorknob, but I can finally stand to leave my perpetually-73-degree apartment (begrudgingly). While avoiding the heat, sun, and everything to do with outside in general, I found myself with a lot of free time and in my recent stint of hermitism, I stumbled onto a book that tried to set my heart on fire. 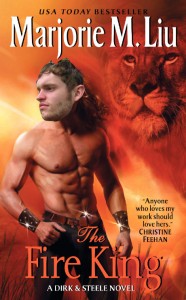 The Fire King is a paranormal romance novel about the blossoming love between Karr, a shapeshifting warlord from the past, and Soria, a one-armed woman.

The plot follows Karr’s return to life and all of the craziness that usually ensues after unearthing a half-man half-dragon/lion. Soria and Karr find themselves linked together by things that they don’t understand, but what we already know as love.

Since a large part of the book is focused on the relationship between Karr and Soria, the rest (plot, secondary character development, conflict, generally important information, etc.) seems to take a back seat to the long descriptions of the two characters’ feelings.

However, once he and Soria lock eyes in the basement of a military base, no one really cares why he’s still alive. The entire plot spans the course of a few days and only seems to become relevant again in the last 50-100 pages when Liu remembers that she was supposed to eventually end this awkward interaction-fest.

The Fire King might lose sight of the plot and other important things, but it does what it tries to do well enough.

Let’s face it. This book wasn’t written to be a groundbreaking story. It was written to try to explore those intangible feelings of falling in love with someone. It tries to give voice to those new, shivering feelings, and it does. Maybe that voice is a little loud and talks a lot, but Liu is able to capture the physical tension between the two characters. In fact, Liu creates so much sexual tension, she could fill a lake with it. This is where The Fire King really manages to shine. Liu spends pages and pages on conversation and inner turmoil and really builds up the anxiety the two feel around one another.

It also helps that Karr only wears clothes for about 30 pages of the 374-page novel.

All of the descriptions of angst and Karr’s abs are well and good, but I know what you’re all wondering: What about the sex scenes? Surely, this book, this manifestation of pure sexual tension, would be at least half, if not three-quarters hot, raunchy, and potentially taboo (I’m looking at you, bestiality) smut? I hate to be the bearer of bad news, but despite the precarious lack of clothing throughout the novel, the sex is almost nonexistent.

I know, right? I was pretty disappointed myself.

About halfway through the novel, in the heat of a desert night, some stuff goes down, but no one picks up The Fire King with the intention of reading a “sex scene” that seems like it takes place between rounds of spin-the-bottle. Basically, Liu really undershot the coitus. We never get to enjoy the joining of Karr’s throbbing, masculine body, and Soria’s…..one-armed body? Instead, we’re forced to make do with a vague mention of the happy couple’s future and imagine the rest of the steamy details ourselves.

The Fire King doesn’t try to reinvent the wheel but it does try to put its own burning mark (much like a cattle prod or a mild venereal disease) on the landscape of paranormal romance. It tries to capture the love between a woman and an ancient transforming god-man, and does a decent-enough job.

But that’s not why someone reads The Fire King, and after the back cover closes and you’re looking at yourself in the mirror the next morning wondering what happened, all you’ll feel is mostly unsatisfied and a little cold.

However, as the god-beast, Karr, got a second chance at life and love, so I will give Liu’s work another chance to set my heart ablaze.

Don’t worry – you won’t have to wait thousands of years. I’m already reading the next novel in the series.

Nathan Claire is a senior studying English at Indiana University. He is the current Publicity Intern on the Indiana Review.