Here on the blog we’ve previously discussed how we select pieces for inclusion in Indiana Review, but in the spirit of transparency, I thought it would be fun to give you all a closer look into how we select content—by live-blogging a poetry selection meeting! Meetings typically last at least two hours, so in an effort to make this, you know, approachable, I’ve cut things down a bit; be sure to check the time markers for how long we spend discussing each poem. We give every submission its due, but if a poem makes it this far in the process, we will take all the time it needs for a thorough reading. 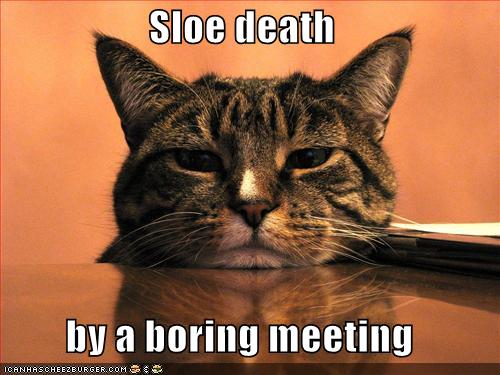 Even this guy wouldn’t be bored at our poetry meetings!

In the spirit of professionalism, I have relabeled our staff by acronyms: E for our Editor, AE for our Associate Editor, PE for our Poetry Editor, R# for our nine readers, and WE for me. The poems are sorted into packets; P2P1, for example, would be the first poem in the second packet.

This particular meeting occurred last Friday, a few days before the Super Bowl (which we do not have comments on…). Poems needed to receive seven votes for publication. Enjoy!

6:20 p.m.: Settling in. We’ve got Hershey’s kisses and Upland Wheat Ale (the beverage of choice on Parks and Recreation!) and blue tortilla chips and salsa and chocolate chip cookies and wine!

6:21: The coat rack fell over! Because R1 put one too many coats on it. Which knocked over a glass of water! Which got all over the WE’s pants! Commotion ensues!

6:24: WE is finally approaching dry. Small talk. Discussion over the creation of a new editorial position. Tentative title: “Furniture Editor.” Responsibilities will include selecting furniture and who may sit on it.

6:28: PE calls the meeting to order. There are five packets left over from the last meeting, and we’ll start with those. R1 is holding the first packet of poems. Now, eerily quiet by comparison.

6:31: PE asks how we feel about the poem. R1 enjoys the language of the poem, how it doesn’t linger on its violence but shrouds it in imagery, but felt like there might have been some hiccups in the lines. R8 enjoys the images and the idea of sorrow, but doesn’t know if the poem has any standout moments. “I don’t have a line that stands out to me, or even a particular image.” R5 says there’s nothing wrong with the poem, but mostly that it causes her to feel neutral.

6:34: PE asks if anyone is on the fence, brings the poem to a vote. P1P1 received one vote; seven are needed for admittance.

6:35: R1 reads P1P2. WE begins peeling a clementine but stops because it’s distracting to the reading. Neither will he type while poems are being read.

6:38: E mentions particular phrases she remembers about the poem, its elegiac and reverential tone countered by a tension she enjoyed, but doesn’t know if she feels a sincerity. “There’s something about it that struck an off chord with me.” R8 doesn’t know if the last line earned the negotiation of the poem’s two worlds.

6:39: R3 agrees that the poem hinges on the last two lines, but doesn’t understand how they’re altering the rest of the poem, doesn’t know if she understands the project of the poem. R4 wishes the narrative carried the weight of the language.

6:41: R7 thought the poem unraveled a few times before the ending. PE brought the poem to a vote. P1P2 received no votes for inclusion.

6:45: WE realizes how difficult it is to eat clementines and live blog a poetry meeting.

6:46: R1 and R8 agree that there are a lot of sloppy line breaks at the beginning, but the poem picks up momentum as it goes.

6:47: R7 enjoyed the fantasy elements of the poem, even with the sloppiness. He didn’t quite understand the ending, thought it brought the poem back down from the fantastical, thought it over-explained the images.

6:48: R4 thought the ending went where she expected it to go, thought it would have been better to pick and choose the various image sets through the rest of the poem.

6:56: R4 admires how effortlessly the poem blended the images. R2 doesn’t like the title. E wonders how the title informs everyone’s reading, feels like it’s telling us to read it a certain way.

6:57: R7 was uncomfortable with the first couplet, and how it interacted with the title; he would have preferred it to start with a stronger image, though he admires the transitions and how the poem leapt associatively.

7:02: R9 makes WE giggle with his breakdown (because of his hand motions!) of the poem. Super-specific comments continue.

7:03: PE asks how the poem makes us feel, regardless of intellectual meaning. R2 wasn’t taken by the title nor the first half of the poem. R7 felt vulnerability, even though he started in the same place as R2. R1 thinks the middle section is lovely, where others seem to feel ambivalent about it.

7:06: R4 thinks the conversation boils down to how much agency a title should have; she thinks this poem could use a more situating title. R8 and WE agree that it’s a very “poemy” poem.

7:13: PE: “This is an awesome conversation, but we need to bring it to a vote.” P3P1 receives seven votes and has been accepted! Hooray!

7:19: R9 loves how situated the poem is, as well as imagined and free, but wonders if it’s too gimmicky given its subject matter.

7:32: WE didn’t realize it was funny until it was read aloud! R9 thinks these poems would work well in a book, because they demand time to be read through.

7:35: WE realizes these entries have been getting short, is getting tired of typing everything down when he’d rather be contributing to the conversation.

7:41: PE brings the poem to a vote. Poem receives seven votes and has been accepted. Hooray!

7:47: R4 really wants to love the poem because of its location and reliability, but is overwhelmed by the poem’s tangents and doesn’t know where we actually are, wonders how it’s all connected.

7:49: R3 knows where a specific line is, which impresses WE. R7 appreciates its puns.

7:50: AE thought it was too long and that the poem’s dramatic situation shifted too frequently and jarringly. E thinks if this poem was a movie, USA Today would describe it as ‘rollicking.’

7:51: R1 compares it to a movie he saw once, in which a man had lions’ faces for nipples and drowned another man using the milk from the lions’ mouths.

7:53: R6 is impressed with how earnestly the poem stuck to its voice, enjoyed it.

7:56: PE brings the poem to a vote. Poem receives five votes and is two votes short.

8:01: R8 thinks this poem does a good job of enacting what it’s doing, and the length (three pages!) contributes to the project. It settles her into a terrifying stasis.

8:07: PE brings the poem to a vote. Poem receives four votes and is three votes short.

8:15: PE brings the poem to a vote. Poem receives eight votes and is accepted. Hooray!

8:17: WE freaks out about how amazing the metaphors are.

8:24: PE brings the poem to a vote. Poem receives nine votes and is accepted. Hooray!

8:25: PE closes the meeting with another bad pun. R7 uninvites him from the Super Bowl party.