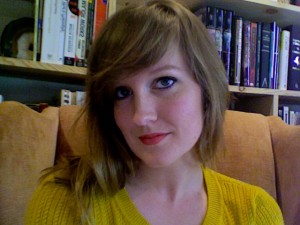 From all of us at IR, congratulations to past contributor Corey Van Landingham for winning The Ohio State University Press / The Journal award for her book, Antidote! Van Landingham won our 1/2 K Prize for her piece “When You Look Away, the World,” which appears in issue 34.1. (Speaking of contests, our annual poetry contest, judged by Nikky Finney, is open until April 1st!) Following is her installment of The Next Big Thing interview series.

First of all, thanks so much to Michael and all the other wonderful folks at Indiana Review who have been so kind to me over the past couple years, and for adopting us internet orphans sans website for this interview!

What is the working title of the book?

Where did the idea come from for the book?

I suppose there are a couple tiers for this answer. There are Events and there are Ideas, and while I will attempt to recall them, I fear it may be like retracing an episode of Lost, where some kind of logic is being imposed on utter chaos just to make you keep watching.

The death of my father. Breaking up with my fiancé.

That there is no antidote one can take for grief or heartbreak. That there are various forms of valediction and one may never get better at saying goodbye. That guilt can feel like a disease. That love can, at times, feel like violence. That love can be cruel. That I can be cruel. That there are multitudinous selves. That sometimes these selves may confront each other. That this may be in a dark forest. That one self may be burying or choking another self. That the moon sees this, and is a jerk. That no matter how many different combinations of words one puts together, it will never make anything whole.

What genre does your book fall under?

What actors would you choose to play the part of your characters in a movie rendition?

All I can think of is that it would be one of those movies I’d feel like I’d have to watch for reasons artsy or hip but would have to pause every ten minutes to get another beer if I was going to finish the damn thing.

But I’ll be good and try to answer. It would be delivered in a series of monologues given in some eerie outdoor space with unidentifiable men constantly lurking in the shadows. The actresses delivering the monologues would be Jean Seberg, Michelle Williams, Felicia Day, Janeane Garofalo, and Natalie Portman’s character in Closer.

What is the one sentence synopsis of your book?

In Antidote, love equates disease, demons are inverted gods, every animal wants something sinister, valediction is a contact sport, and someone is always watching.

How long did it take you to write the first draft of the manuscript?

Most of these poems were completed in fits of writing furiously during my thesis year in the fall of 2011.

Who or what inspired you to write this book?

X-rays, rafting trips with my father, holding séances in the ravine by my house in Oregon as a young girl, microscopes, animal documentaries, dreams of homesteading, Paul Celan, feeding my father’s ashes to small fish in the Rogue River, diving into that water, PBS’s Art 21, claustrophobia, Sappho, playing with Petri dishes in my mother’s lab, missing the mountains, word hoards, listening to Bill Callahan, being the daughter of a microbiologist, being the daughter of a photographer, being a girl who was never as happy as the other girls, big and lusty Midwestern storms, bourbon, Amy Hempel, cadavers, hunting for owl pellets in the forest with my mother, Isadora Duncan, epoché, always having cold feet, listening to Julianna Barwick, the moment at the Portland Zoo when my father was so thin he resembled the giraffes or the long-legged birds and I thought he might fly off, and then later that summer when he did.

What else about your book might pique the reader’s interests?

I quoted Yeats three times by accident. Also, some of these poems are actually supposed to be funny in a vitriolic sort of way, so it’s not all doom and gloom!

Will your book be self-published or represented by an agency?

To my utter delight and astonishment and for which I am forever grateful, Antidote was chosen by Kathy Fagan as the winner of The Ohio State University Press/The Journal award in poetry, and will be published by OSU Press in October.