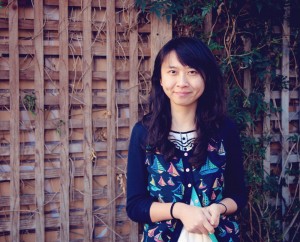 All of us at Indiana Review would like to congratulate contributor Sally Wen Mao on winning the 2012 Kinereth Gensler Award from Alice James Books! Her poem, “The White-Haired Girl,” appears in issue 34.2. Here’s her installment in The Next Big Thing interview series which is currently sweeping the internet.

Thank you to Michael Mlekoday, author of the forthcoming book of poems The Dead Eat Everything, out from the Kent State University Press, for tagging me in this series called The Next Big Thing! Also a big thanks for publishing this on the Indiana Review blog, because I am an internet dummy.

What is the working title of the book?

Where did the idea come from for the book?

Poetry books usually come from entire constellations of ideas. Here are some of the most pervasive ones, for me:

1. When researching names for an angry third world feminist girl band in 2007, I stumbled upon the fact that honey badgers aim for the scrotums when attacking larger animals.

2. Honey badgers pretend to be immortal when they are not. They may have thick skin and fierce claws but they do get hurt. Poetry is feral. So is desire. The honey badger denotes a feral desire. More so, it denotes a female, vulnerable desire. The honey badger exemplifies marginalized bodies. Such is the paradox of poetry: it’s vulnerable, yet attempts to be brave. We do not know whether to call it stupid, or admirable, or both.

3. Mad honey makes people go crazy. They eat it in a state of wonder or fit of hunger or desire. They experience hallucinations after eating it. They get drunk on this honey and vomit and tremble and cry. They suffer for their desires.

What genre does your book fall under?

What actors would you choose to play the part of your characters in a movie rendition?

Hoo-boy. The “movie” rendition of my book would probably be a performance art piece, or an experimental silent film, or a music video for Blonde Redhead, or a collection of animated shorts. Can I name directors instead? For the first section of my book, Hayao Miyazaki would direct, and the voice actor of Totoro would play the Sputnik dog, Kudryavka. Gael Garcia Bernal would play Audubon in “Excerpts from the Dream Diary of Audubon”. In the second section of the book, Wong Kar-Wai would direct, and Takeshi Kaneshiro would play the love interest in every poem in the collection, including the venus flytrap. In the poem published by Indiana Review, Xi’er (the white-haired girl) is Maggie Cheung. In the final poem, “Drop-Kick Aria”, Chiaki Kuriyama from Battle Royale would play the girl student at the dojo.

What is the one sentence synopsis of your book?

Tiny but fanged weaklings with milky bones hurt, attempt to survive, fight, and then conquer the world with broken teeth.

How long did it take you to write the first draft of the manuscript?

Who or what inspired you to write this book?

Watching a honey badger’s butt stick out of a log in the Prague Zoo. Dancing in weird places such as busses or beaches or parking lots. Adventuring, hitchhiking, trespassing. Yoshitomo Nara’s drawings. Walking on highways. Indignation. Reading James Baldwin at the mall. Returning to a familiar place where you’ve forgotten the smells, and having them suffuse your senses again as if attacking you. That moment in Left Eye’s documentary when she was in the jungle, naked, and friends with the animals. Field guides to trapped animals. Turbulent airplane rides. Emergency landings.

What else about your book might pique the reader’s interests?

Will your book be self-published or represented by an agency?

Mad Honey Symposium is the winner of the 2012 Kinereth Gensler Award and will be published by Alice James Books in May 2014.

One Response to “The Next Big Thing: Sally Wen Mao”