This is one of those times. There was a leak in my apartment this morning, which was unpleasant, so, to keep myself from turning into Mr. Why Isn’t the World as Grumpy as Me, let me present to you a list of things I’m excited about:

1. I just found out that the Bloomington Bagel Company not only has iced coffee, but HAZELNUT ICED COFFEE. This is going to dramatically change my life.

2. The artist Andy Alcala has work on the cover of our latest issue. What we haven’t mentioned yet is that Andy has been painting these masterpieces ON HIS OWN FACE. That is not a model. That is the artist. He even does his own eyelids! Talent.

3. Our latest issue (mentioned in #2) is shipping now!

4. A puppy climbed the mountain of boxes in our office: 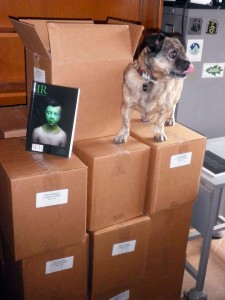 Inside those boxes? You guessed it! Copies of our new issue. We have a lot of them. You should order one. You know, if you like strong stories and compelling poetry and enlightening essays.

7. Crystal Bowersox is going to be in town on July 28. I love her. She was totally robbed of the 2010 American Idol crown. Remember this performance? Please.

8. Discussing haircut options with our editor. I mean, hers looks great as is: 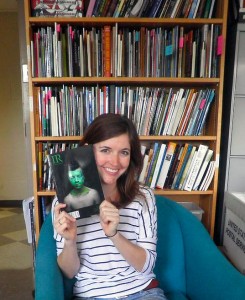 but mine’s a train wreck (note the absence of photo) and we’re probably ready to do something hip with our hair. Maybe.

9. One of our new issue‘s contributors, D. Gilson, just released a chapbook from Sibling Rivalry Press. It’s called Brit Lit and – get this! – it’s filled with poems about Britney Spears. ALSO I READ IT AND IT’S INCREDIBLE.

10. Lists that go on to ten points just to mention once again the main point. Excitement!

2 Responses to “Things I’m Excited About”