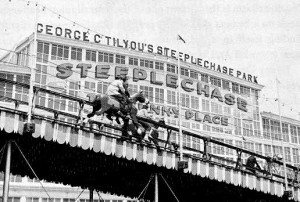 IR: How did this piece come about? At what point did the length restriction start to factor into your writing?

Bowers: I first heard about the Steeplechase ride from the great documentary Ric Burns did about Coney Island. I did some research about the ride, looking at old photos and snippets of film, and I was struck by the insane danger of the ride, as well as the collision between the natural and mechanical inherent in the horses, which is a theme I’m obsessed with. From the start, I knew I wanted to keep each vignette short and stand-alone, because the physical experience of riding on the Steeplechase was a blink-and-you’ll-miss-it sort of sensation. It felt wrong to go on and on about a carnival ride that was literally over in less than a minute. That said, there is an unpublished fourth section that I finished after submitting the other three pieces to the Indiana Review. Thinking of each vignette as a separate piece unto itself, as well as part of a cycle, allowed me to do that.

IR: How did you negotiate the relationship between form and content of this piece?

Bowers: It took me a long time, over a year, to figure out how to write about the Steeplechase ride. I tried several different approaches before I decided to use each horse mannequin as an occasion for a scene, and number the scenes the way I did. After I found a photograph that showed how women were expected to ride the ride sidesaddle during the late 19th century, without a seat belt, all the main characters became women. I was interested in what riding the horses meant to different age groups and classes of women, how an amusement park ride could be a dehumanizing experience, or an empowering one.

IR: How would you assign a genre to this piece?

Bowers: I consider it historical fiction, because it includes a lot of factual details about a real place and a few real people, but I did take a lot of liberties. I don’t mind fudging certain details or creating anachronisms to preserve an image that pops up, or even inventing things that sound real. That’s the fun part, for me.

One Response to “Interview with 1/2K Finalist: J. Bowers”