Time is running out to submit to the 2013 Fiction Prize! With only three weeks left, we encourage everyone to dive in and submit their stories for a chance to win. In order to make the seemingly daunting task a little easier, we asked this year’s judge, Claire Messud, to offer some advice to aspiring fiction writers. 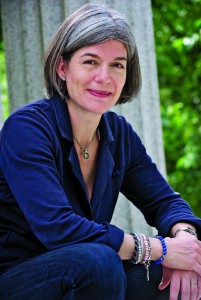 Claire Messud‘s novels include The Emperor’s Children, which was a New York Times Best Book of the Year in 2006 and long-listed for the Man Booker Prize. Messud most recently wrote The Woman Upstairs and teaches in the MFA program at Hunter College (CUNY).

She graciously took the time to answer a few of our questions about what makes a story memorable and how to write resonance in “a world of toothpaste and candy bars.”

IR: What catches your attention most in the first paragraph of a story?

It’s hard to pinpoint what, exactly, catches attention. But as a reader, you want to be swept into a world. You don’t need to know everything about that world straight away, but you need to believe in it from the first paragraph. There are lots of ways for a writer to accomplish that — through voice, through detail, through style, through setting. I think it also always helps for a reader to feel that the prose is conveying a lot, is working on different levels, right from the beginning.

IR: What are the most common ways you see a story fail? Is there anything that makes you put down a story immediately?

Stories are like fish in the water — beautiful but slippery and hard to get hold of. This is true for readers — it’s hard to say exactly what makes a story work — and for writers, too. There are infinite ways for a story to fail; and many of them don’t matter. That’s to say, if you can make what’s important work, then the story will work in spite of its flaws. Stories require proportion — you need to have a sense of scale, of what can be told in a story. Much can be implied, but of necessity, not so much can be told. It wouldn’t otherwise be a story! So you have to balance having something at stake (it can’t just be about toothpaste or candy bars), with the working of the actual world (we live in a world of toothpaste & candy bars), and you have to strive for resonance (the quarrel over the candy bar shows the marriage has fallen apart, etc) without falling into contrivance — you don’t want to be heavy handed. So it’s like walking a high wire, rather.

I’m a pretty tolerant reader. I don’t put a story down immediately unless the phone rings or a child screams.

Again, there are lots of different ways for a story to have staying power. Stories are an extension of life, if you will. Think about what makes an experience memorable: that it evokes a powerful emotion in you; that it is unlike any other experience; or, conversely, that it is like some other experience, either really positive or really negative. Why do you remember one person and not another? Because they’re interesting, or because they’re funny, or because they help you to see the world in a new way, or because they remind you so much of your Uncle Ed. There are infinite routes. But the simplest answer might be to say that what makes a story lasting is that it is true. Not literally true, but humanly true. That it reflects something true about how people are and how they act.

IR: What can winning a contest like the Fall Fiction Prize do for a writer (personally, professionally or both)?

Writing is a solitary, deeply private activity. It’s about translating the world in your head into language, and writing it down. You do that because you want to communicate to others. Sometimes you don’t know whether you’re any good at it, whether people have any sense of the world in your head. Getting a positive response from readers — whoever those readers are — can really bolster a writer in her solitary journey: it’s great to feel that you aren’t entirely alone, and that other people agree that it’s worth persisting.

That said, we should all take prizes with a grain of salt: judges are simply choosing what they most respond to, which is by no means an absolute measure. Think how differently people read, & what different things people enjoy, & imagine each of your friends being a judge and what different things they’d be choosing. To win a contest is fantastic, no question. But not to win — that’s no statement about anything, and absolutely not a reason to be discouraged.

IR: What advice would you give to writers entering the contest (especially in light of how a contest for a literary magazine like IR differs from other contests)?

Simply as a general piece of advice, I’d encourage young writers to write about what matters to them. Readers can generally tell! If a story matters to you, then the next step is to find the strongest way to tell it, and the richest, and the most affecting. That’s no easy task. But it’s like cooking: if you start with the best ingredients, you’re well on your way to having a delicious meal.