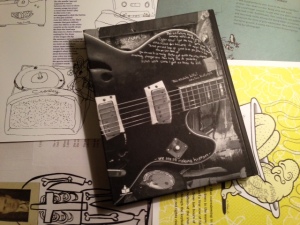 Last summer at the Newport Folk Festival, Jack White was joined on stage by actor John C. Reilly. Together they covered Lead Belly’s “Goodnight Irene”—and Jack White wept. The magic of a music festival sparks in the friction, the weird juxtaposition of singular voices for one weekend only! The best moments of literary anthology Language Lessons, Vol. 1, occur at just such junctions—curated carefully enough to allow for the haphazard transcendent. Headliner Jake Adam York opens the show. Adrian Matejka steps back and lets the ones-and-twos speak for themselves. Nicky Beer ruminates on the panda, while a few stages over, the mythic Frank Stanford returns from the dead for one more set. (Like the Tupac hologram at Coachella, but with more blood.)

Lessons is the first official book release from Third Man Books, the publishing imprint from Jack White’s Third Man Records. The idea and elbow grease came from poet-musician Chet Weise who, with co-editor Ben Swank, organizes Nashville’s Poetry Sucks! DIY reading series. This collection began as a collective with a microphone and people in a room, and a portion of that punk ethos is preserved in printed-and-bound form.

There are more than a few pieces here that name-drop musicians—Sun Ra, Hank Williams, Miles Davis, Public Enemy—and many of the voices emanate from a disembodied South. Yet the concerns expand far beyond a history of American popular music, and the product is more than a representational monolith. In its unpretentious and exuberant tone, Lessons enters the empty field between musicians and writers, and attempts to collapse that false distance by throwing a party. The result is a multi-vocal experience of American letters with variant chords that won’t tune to every ear. In other words: Ain’t no Billy Collins in this b.

Lessons does include its share of Major Lit Award finalists like Dale Ray Phillips and C.D. Wright, but it also gives space to essays by protopunks like Richard Hell. Still, for Vol. 2, the scope of contributors’ background and styles should be significantly expanded. The most exciting moments occur when up-and-coming poets outright challenge cultural currents old and new: Joshua Gillis’s narrative heartbreaks collaged from Craigslist’s Missed Connections; or Dan Boehl’s millennial meme-ifestos—“quick/!!!/to/the/yolo/mobile/!!!”—limited-character scrolls that read like howls.
Lessons strives to be a multimedia experience, even providing bonus content like vinyl recordings, screen prints, and a big ol’ hardback. Lessons has hits and misses; several of the prose pieces came off like baggy jam bands and had this reviewer running to a different tent. Yet like the best music fest, Lessons runs on currents: It simultaneously taps into zeitgeist while creating it anew. Music may die when pressed into the page, but the project of Language Lessons is live and loud.

Best-of-what’s-next Kendra DeColo talks back directly to a poet of the previous generation: “and get a Camry./Something about misogyny/makes my clit grow/seven throbbing inches.” Two pages later, in a previously unpublished poem, Frank Stanford writes, “God says we can screw now./…When I was younger I drove a Lincoln./God said to trade it in.” The echoes reverb, and we discover a new chord.