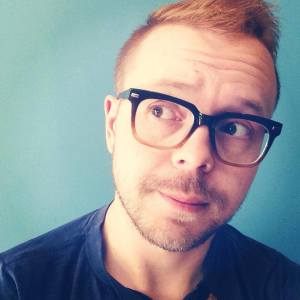 D. Gilson’s essay, “On Faggot: an Etymology,” appeared in The Indiana Review issue 35.1 and was selected by John Jeremiah Sullivan as a notable essay in The Best American Essays 2014. Here’s an interview with Gilson in which he discusses his piece, touring Anne Hathaway’s cottage, what his essay so easily could have been, and what he pushed it toward instead.

Your essay is at once tender, uncomfortable, and honest. What was your biggest challenge in writing this piece?

Thank you! I was traveling through England with a group of writers and wanted to write a very traditional travel narrative of our time there. This was also a time when gay marriage was becoming the prominent political issue back stateside, a discourse which continues, for the most part, to annoy me. So I was thinking about writers who write queerly, which is to say both about or through queer sexuality and in a non-linear manner, and wanting to reclaim, or at least explore, some part of that past which is f-a-b-u-l-o-u-s (and I fear at threat as gay becomes just as “normal” as straight). Then I was in Anne Hathaway’s cottage when a tour guide said “faggot.” A friend and I both turned immediately to her, and I thought, hey, thinking about faggot, a word I love, might a way into writing about this trip.

There are parts some might render the reader uncomfortable — I’m guessing scenes with me in a bathhouse or about my brother’s suicide — but I don’t necessarily find those difficult to write in the emotional sense. What is challenging in writing about those things is connecting them outside myself, lest the essay become mere naval gazing. I hope a structure that borrows from linguistic etymology helps me avoid that (and I suppose, to escape the uncomfortable scene when I need to).

What was your process like in creating this essay? Did you know, starting out, that the piece would assume its final fractured form?

Not initially, but upon returning to Pittsburgh (where I was living at the time), I was teaching Sontag’s “Notes on Camp” and looking at the OED’s explanation of faggot’s etymological history. Both Sontag and the OED deploy the time-jumping fragment to circle around a topic or theme. A-ha! That was exactly what I had to do. So I started cutting up (copied) pages of the OED, and that became the organizing structure. I’m a poet, too, so something about the ability to physically cut up an essay and rearrange it on the floor of my office felt familiar, like ordering a manuscript.

What to your mind necessitates the form? The piece moves through space and time freely, anchored loosely by one narrative, but there seems to be an indelibly focused logic at play.

Faggotry, by which I mean the act of being an aesthetically-minded faggot, is pretty damn awesome. And I love self-identifying as a faggot, especially at a time in American culture where Gay, Inc. wants us to act “normal,” which is to say, secure a monogamous relationship, have a kid, and buy property. John D’Agata says, “Sometimes the essay is where we end up when everything that we know must change,” and so I think the form here is necessary because there are so many ways of thinking about faggot, and here I was thinking about what the word means in my own life, about its violent past, and about its potential for reclaiming a queer identity that faces attack from not only hetero-, but also homonormativity.

I also get tired of writing from gay men that rests on the laurels of victimhood. This essay could have easily been just “My brother called me faggot and then committed suicide,” but what does that matter if I can’t connect it to a larger culture, which here ranges from etymology (most prominently) to film, music, AIDS, Shakespeare, Wordsworth, the Royal family, sexual undergrounds, urinals, and cute baristas in coffeeshops.

What are you working on now? Talk to us a little about what new projects you’re up to.

Well, this week I defend the prospectus to my dissertation, tentatively titled “We Are Real Cool: Hipsters, White Melancholia, & Neoliberal Citizenship,” so after that, I start writing the chapter I’ve been researching on Wes Anderson’s Moonrise Kingdom. I’m also finishing a book of essays, Learning to Poem, which comes out in the fall from Sibling Rivalry Press. And learning to knit. Because I’m a faggot.

D. Gilson is the author of Crush (Punctum Books, 2014), co-written with Will Stockton; Brit Lit (Sibling Rivalry, 2013); and Catch & Release (2012), winner of the Robin Becker Prize. His work has appeared or is forthcoming in PANK, The Indiana Review, and The Rumpus.

One Response to “Interview with Indiana Review Contributor: D. Gilson”