We’re proud to have the fantastic Elizabeth Eslami join the Indiana University Creative Writing Program as a Visiting Lecturer. Her collection and novel chilled us; we felt the words cold in our bones. Here Elizabeth answers questions posed her about her writing habits, the deft handling of place in her work, her forthcoming novel, and how she believes in magic. 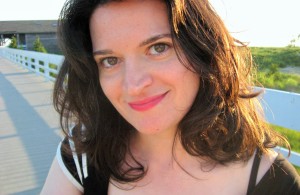 Elizabeth Eslami is the author of the story collection Hibernate, for which she was awarded the Ohio State University Prize in Short Fiction, and the acclaimed novel Bone Worship (Pegasus, 2010). Her essays, short stories, and travel writing have been published widely, most recently in The Literary Review, The Sun, and Witness, and her work is featured in the anthologies Tremors: New Fiction By Iranian American Writers and Writing Off Script: Writers on the Influence of Cinema. She’s a Visiting Lecturer in the Creative Writing Program at Indiana University.

You’re the author of Hibernate, a fantastic collection that “follows ordinary men and women who slowly awaken to hard choices.” The stories are remarkably expansive in their ability to render place, and so many different places, so well.  Which was the most difficult of these stories to write–and why?

Thank you. Cultivating the kind of “placeness” that is inclusive of character and conflict, that contributes to the entire collection’s emotional landscape was very important to me, especially because I knew I wanted to bring in a variety of settings and felt the responsibility that comes with that.

Each story offered its own curve balls, mostly during revision, but the two that were the most challenging were probably “Adwok, Pantokrator” and “Victory Forge.” With “Adwok” I had an experience I’ve had maybe once or twice with a story which is that the first sentence is just there, and it’s right—in the work it does to establish tone and voice, in the unifying image it conjures—and it stays right, doesn’t need to be weeded out three drafts later when you realize it was a false start. So I had that beginning, but then there was nothing after it. Glacial blankness. I think I spent about two days slipping around, just trying to write something after that sentence, and even though at this point in my life I know enough to be comfortable with early stage mess, I just had a feeling that I should stop slipping and leave it alone. So I put it away for months, and that’s what it took. When I returned to that original first sentence several months later, it still held true, and I found the way through the rest of the story, although the nonlinear structure, too, came late to me. I had to take a lot of time with the first draft of “Adwok”, and I don’t often take big breaks until I have at least a full draft.

With “Victory Forge,” it was the pressure of getting those details right. Again the tone, but definitely the world of the military and Basic and the way someone on the outside would see it and resent it, understand and misunderstand the power of its sway. I had my own biases to work against, and I had a certain amount of research to do, had to know when the research would only take me so far.

Which came the most easily, and why?

“The Yana Land” came out whole in a single day, with very little revision. Like those women who don’t know they’re pregnant. Have a pain, then deliver a baby. I’d been reading all of Barry Lopez during an Oregon winter, lingered over Arctic Dreams, and I’d always been fascinated by Ernest Shackleton’s Trans-Antarctic Expedition. Anyway, I believe in writing your obsessions. I’m not sure you have a choice, really. I’d have never consciously sat down to write a polar explorer story. It was the voice. I stuck a hook in it and let it pull me.

Do you have any hard and fast “process”? Any long-held or recently helpful quirks in your writing habits? (Time of the day, place, etc.)

Coffee and quiet. Helps to have a sleeping dog nearby.

Generally the writing comes best first thing in the morning or late at night—afternoon is dead time—but you make it work where and when you can. I’ll set a timer sometimes if I need an extra push, and I’ve used Freedom on occasion, especially if I’m working on something that requires a certain amount of research. Writing time and internet time are mutually exclusive for me; it’s too easy for me to slip into the vortex of research. The best rule I’ve found is to write something, as many days as you can, because one day you’ll be dead. Perspective! J But I do seriously remind myself of the books I want to write before I die and how supremely pissed I’ll be if it turns out that I used that time clicking through HuffPo, reading about that dog in Seattle who takes the bus by himself to the dog park. Although actually that was a pretty great story, so what do I know.

Talk to us a little about your novel-in-progress. What’s been the greatest challenge and what most excites you about the project?

A young woman, very loosely based on the period photographer Evelyn Cameron, looks to escape her drunk father and marries a wolfer bound for a handhewn cabin in the Pioneer mountains of Montana. She learns a new language as she follows him. Traps aren’t abstractions but rather tools men use for hobbling, boiled in water to hide the smell. It’s a quasi-historical novel without the full constraints of history, and it’s a novel set in the Old West without being a Western. It’s deeply literary and is inspired by Barry Lopez’s great nonfiction book Of Wolves and Men and Cormac McCarthy’s Blood Meridian.

What excites me most is how nervous the material makes me. Every time I sit down to work, I feel uneasy. There’s no terra firma. There’s research involved, real people I’m taking liberties with, real history and atrocity, all kinds of ways this thing can go wrong. I love about it that there’s no aspect of this project with which I’m comfortable, except the voice, which I trust above all else to get me to the end.

This is also the first book I’ve written in which I actually know the ending. I’ve left myself plenty of room to get there along the most circuitous journey possible, but it’s exhilarating to have an image waiting for me.

Which character that you have written do you feel most close or drawn to, and why?

I think it’s my job not to get close to them. To get close, to me, means I’m occupying a space where I might judge or exonerate or sympathize with them. For me it’s better to view them like Victor Frankenstein’s monster. I stitched together some body parts, I had a rough idea of their predilections and prejudices, but after they’re jolted to life, it’s in my best interest to see what they do on their own and be mostly amazed by it. One thing I can’t abide though is a character I can’t respect. I respect all of them, even the rat bastards, because I try so hard to make every word and action something I believe in my heart they’d say or do. I respect their agency, the power of a well-drawn character to make me (and what I might want for them) invisible.

Do you have anything else in the works? Anything as-of-now abandoned or on hold that you’d like to return to?

I have a bad habit of not abandoning much. It ends up in the pot for some other soup. I’m simultaneously working on a collection of linked stories also set in Montana, but present-day, after members of a cult-like group move through a town.

What’s been the biggest challenge for you in writing, either short stories or your novels?

Insufficient time. Impatience. Saying yes to too many other things that will gobble up chair time. Paying too much attention to what somebody more successful is doing. Which are all personal challenges of mine, too.

Do you believe in magic?

I believe in a kind of magic that’s entirely subjective and makes you small in the world but more a part of it when you recognize its presence. That kind of magic when you see squirrels on campus and they come up from under a leaf like it’s a trap door, or they frantically fold and flip leaves like miniature books. We adopted a senior rescue beagle named Sal a few months ago, and no one ever told me beagles have a certain beagle smell, like yeast and Doritos, or that they use their ears like nightshades when they nap in the sun. Creek water moving under ice in a certain way that looks like fingers playing an instrument. First snow. That Gillian Welch song, “The Way the Whole Thing Ends.” When the IU clock plays “Sunny Side of the Street” and it’s October and you’re walking around after having a good day, a good teaching day. A student asking to shake your hand after the last class. Unexpected kindness. Offering it or being on the receiving end of it. A really good chocolate milkshake. Reading something so powerful that you can actually feel your blood under your skin with every word. Writing so long and hard that you’re in the dark without realizing it.