When she saw herself, finished, she said, It doesn’t look like
me. Picasso said, It will. Perhaps it will look like her
because it is the document and will remain, while she is
just a person who will fade. Now, when we think of her,
we think of this painting. Picasso was planning ahead.
The painting is evidence but not proof. There’s no proof
that she looked like that, even though we have the
document. She existed enough to be painted. She could
have been an idea, but that’s another kind of existing.
The hand is a tool. The brush is a tool. The paint as well.
There is no machine here, though the work gets done.
A hammer is a tool when banging its head but a lever
when pulling up nails. A lever is a machine, has a fulcrum
which can be moved to change the ratio of something
or other, effort for distance. There is a fulcrum in
the mind that can be moved as well. I do not know what
else to say about this.

It’s hard to talk about what you believe while you are
believing it. Fervor reduces thought to shorthand and
all we get is an icon. Give a man a weapon and you
have a warrior. Put him on a horse and you have
a hero. The weapon is a tool. The horse is a metaphor.
Raphael painted this twice—white horse facing east
against the greens, white horse facing west against the
yellows. The maiden flees or prays, depending. A basic
dragon, the kind you’d expect from the Renaissance.
Evidence of evil but not proof. There’s a companion
piece as well: Saint Michael. Paint angels, it’s easier:
you don’t need the horse. Michael stands on Satan’s
throat, vanquishing, while everything brown burns red.
All these things happened. Allegedly. When you paint
an evil thing, do you invoke it or take away its power?
This has nothing to do with faith but is still a good
question. Raphael was trying to say something about
spirituality. This could be the definition of painting.
The best part of spirituality is reverence. There are other
parts. Some people like to hear the sound of their own
voice. If you don’t believe in the world it would be
stupid to paint it. If you don’t believe in God, then who
are you talking to?

Wanted for murder, a price on his head, Caravaggio
does what he always does—he tries to paint his
way out of it. This bad boy—whose moodiness came
to be called the Baroque, this thug whose soul
was as big as Rome and full of anvils—paints his own
face on Goliath’s severed head and offers himself up
as villain, captured, to escape the hammers of the law.
Allegory, yes. A truth as well. But truth doesn’t count
in law, only proof. He took the gods and made them
human. His Bacchus was a worn-out drunk. An animal
likely to sleep in a pool of its own sick. He raised
the status of the still life, made subjects out of objects,
turned nature into drama—the bloom on the grapes,
the bloom on the boys, leaves as important as
nudes. Exaggerated light, pure theater. Evidence
of a mind he delights in. Evicted from Rome, he wants
back in. They want his head and he’s prepared to
give it to them. He paints David in yellow pants while
the pope’s nephew arranges his pardon. July 1610—
Caravaggio rolls up his paintings and sets sail from
Naples, heading north. They stop for supplies. No
one’s heard of the pardon. Jail. He pays his way out,
but the boat and his paintings have sailed on without
him. He follows. Malaria. He dies three days before
his pardon arrives and three days after Rembrandt’s
fourth birthday. His painted head arrives in Rome weeks
later. All painting is sent downstream, into the future. 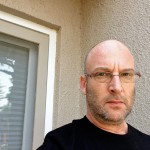 Richard Siken is a poet, painter, and filmmaker. He lives in Tucson, Arizona.