We are proud to present this exclusive online content by Alexander Rothman to celebrate the release of IR 37.1, Summer 2015, which features our graphic memoir folio.

I call the work that I make and publish “comics poetry.” I have reasons for using that name and working in the hybrid form, but here’s the thing: I have no idols to tear down, and I hate polemics, so,

It’s really an invitation. There’s work to be done (always), and here’s what some of it could be. This stuff will be stronger if we hold it up next to each other.

Now, then. Here’s what I mean by “comics poetry”: poetry is a form where the medium is language. Other forms have ancillary concerns—for instance, plots for novels, arguments for essays, and performances for plays. Of course poems can take on these concerns, and of course language plays a central role in these other forms. But at the end of the day, more than any other practitioner, a poet is just dealing with words. When she sets out to do work, she must ask herself, “How do I solve this creative problem with language?” or “What else can language do?”

To put it another way, poets spend most of our time rooting around in language’s toolbox. We know that the earliest poems arose from oral traditions. To enhance the telling of histories and epics, performers developed mnemonic rhythms, breath-control strategies, and so on. Successive generations of poets have added countless more strategies for harvesting words’ expressive potential. We draw upon the connotative and denotative sense of words; their sounds, alone or in intricate meters; their enjambment across lines; their spatial arrangement on the page—every last aspect of language is there for the poet to use, break, reinvent.

That’s my working definition of poetry. Do I think it’s the only one or the “correct” one? Of course not. It’s so broad as to be absurd, but I think it serves as a container for the myriad, fractious things that have been called “poetry.” What else binds sestinas, slam, caligrammes, and haiku?

It’s similarly difficult to define “comics” in any inclusive, meaningful way. I approach the form as one that treats images like other writing treats words. It does so most basically through juxtaposition. Place two or more images next to each other, and some semiotic impulse in our minds can’t help but connect them. This isn’t necessarily the process Scott McCloud calls “closure,” where we supply the missing action between panels—for instance, seeing one image of burning fuse, and another of smoldering rubble, and visualizing the explosion in between. But it could be something like that, or just an instinctive comparison or association. A is bigger than B; X plus Y evokes nostalgic sadness. 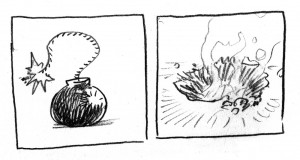 This juxtaposition can take shape sequentially or in an array. (An underappreciated aspect of comics is the reader’s ability to apprehend a page or spread all at once.) It can feature one clear reading path or multiple possible ones. I don’t think it even needs to involve more than one image. We associate single-panel cartoons with comics for reasons beyond style or historical association. Comics’ mechanic of juxtaposition operates not just between images but between images and words as well. And much like poems are built from words, juxtaposed visuals provide the foundation for comics poetry.

Words aren’t necessary for comics, but of course they’re there to use. Panels aren’t necessary, but they’re also there to use. Where the poet’s toolbox contains every imaginable arrangement or manipulation of words, the cartoonist’s holds analogs for the visual elements of the page. The cartoonist Seth defines comics not as the oft-assumed “prose and illustration,” but instead as the marriage of “poetry and graphic design.” Setting aside his somewhat different definition of poetry, this is instructive. The cartoonist arranges every aspect of the page. Not just how many panels, but what shape they are, how they’re drawn, how much space is between them. The size and shape of the page, the media and quality of the mark making, and on and on and on. All of these has enormous expressive potential, on their own or in relation to each other. 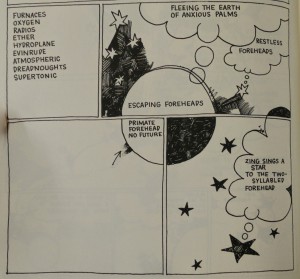 What else can comics do? What untapped expressive power hides among those myriad elements of the comics page/spread/book/scroll? Joe Brainard writes out Barbara Guest’s words, “Zing sings a star…” and puts them in a thought balloon, the tail pointing to the moon. How does “sing” change placed inside a thought balloon (or a cloud)? 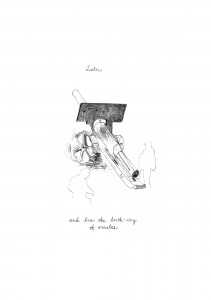 Warren Craghead writes the word “listen” hovering in cursive above a drawing of a WWI cannon, its operators drawn as ghostly pencil outlines around white silhouettes. What does this sound like? Can we place ourselves on the timeline of the gun being loaded, fired, reloaded? Why? 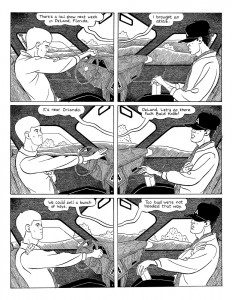 John Hankiewicz draws a conversation in a car. He repeats the same basic structure over and over, flattening and splaying the interior to give us roughly the point of view of either character for any given panel. The word balloons stretch to the unseen character out of frame. What are the effects of these choices and their repetition?

What are the expressive differences between black-and-white and full color, or among various limited palettes? Why might we still describe an evocative image verbally when we could draw it…or vice versa? What are the effects of different visual approaches to lettering? Or the distribution of text across the field of the page? What changes when text is in a caption or a balloon, or simply floating on the page? And if it’s in a balloon, what if the tail points to the speaker in one panel, and a potted plant in the next? What can we get from the strategic deployment of a visual motif throughout a work?

My goal with this manifesto is not to answer these questions, but to help generate the work that will. In outlining such broad definitions of “comics” and “poetry,” I hope to maintain as much expressive openness for the form as possible. This work does not call for a particular kind of content. Comics poetry is not synonymous with “beautiful, meaningful comics” or “self-important comics” or “very thinky comics.” It is work that draws upon the expressive potential of visual language.

Let’s say you make a comic interpreting a famous poem—“so much depends / upon // a red wheel / barrow…”; why on earth would you put those words in a panel with a drawing of a red wheel barrow? If a poem is a whole, living work, I can’t see why it’s crying out for embellishment. This is nothing against illustration—successful illustration goes well beyond literalist reproduction. Let’s just call this ’stration. Comics poetry should balance freight between image and words. These elements are only doing work if they’re changing each other. Duplication is deadweight. 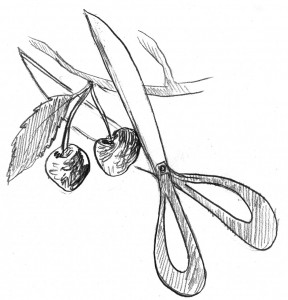 I’ve spoken about openness, and I’ve omitted a thousand caveats. If comics don’t need words and they don’t need multiple panels, how isn’t every painting a comic? With that definition of poetry, why bother to distinguish it from prose at all? I don’t care. Leave me alone. I want definitions that are generative, not restrictive, of work.

But that is not an excuse to duck criticism or rigor. Negative capability is not the artist’s get-out-of-scrutiny free card. There’s value to work that is intelligible only to the person who makes it, but that work by definition does not need an audience. Published work, on the other hand, must consider its readers.

That doesn’t mean we need to aim for an academic or rarefied audience. Here’s the thing about schools of art, theoretical frameworks, and definitions: they’re wonderful as bookmarks. They’re wonderful as long as they’re generative as work. But these same things are hateful and pointless in the service of gatekeepers. Their job is to pull our attention to a particular cluster of ideas. Our job as creators is to make work. I don’t really care whether something doesn’t “count” as comics poetry, because it could just be the first push into new territory, and hybrids and liminal things are always more interesting than those that cleave to orthodoxy.

It’s important for us both to embrace rigor and to work toward openness. So yes, it turns out that I do have some ideas about art writ large, and when I talk about openness, I mean something different than “anything goes.”

Art is an empathy engine. It’s a practice that establishes a certain relationship with the world. The more one engages art—as either maker or viewer—the more one enters different perspectives and subjectivities. (One of my favorite definitions of poetry, quite distinct from the one I use above, is that a poem is a map to a poet’s thinking.) This expansion of subjectivity is how we bridge the distances between people. It doesn’t mean that all art needs to be nice, positive, or politically correct—far from it. But this subjective bridging is, in my opinion, what art is for.

This approach to art is both simple and exceptionally difficult. It takes repetition and time. It takes an attitude of receptivity that work (that another person’s subjectivity) has something important to tell us. It takes the patience to puzzle out what that might be, to slow down and listen. And if there is any reason that this moment demands comics poetry, I think here’s where we find it.

As a new form (or at least one where precedents are largely unavailable), comics poetry is difficult and uncharted. Practitioners must figure out what they’re doing. Readers must learn how to read it. Our media environment encourages quick consumption of content tailored to our individual dispositions. This work, on the other hand, asks us to walk a mile or two in someone else’s brain. 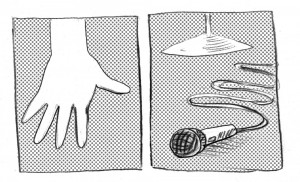 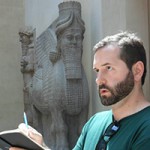 Alexander Rothman is a cartoonist and poet, as well as publisher and co–editor-in-chief of Ink Brick, a micro-press dedicated to comics poetry. His work has appeared in such publications as The Brooklyn Rail, The Rumpus, the Indiana Review, Drunken Boat, and the Society of Illustrators’ 2015 Comic and Cartoon Art Annual. He lives in Queens, NY.    More at inkbrick.com.

One Response to “What is Comics Poetry? by Alexander Rothman”