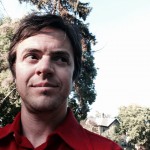 Reading here in Bloomington, IN in just one week. To celebrate, we asked Matt a few questions about how he started writing (it’s a great story), his experience designing menus for Julia Roberts’s private parties (no kidding), his research process (some of which was even unintentional!), and if he believes in sea monsters. We hope you enjoy his responses as much as we do, and that you’ll come on out to hear him read from his work at our annual Blue Light Reading at The Bishop March 5 at 7 PM.

Matthew Gavin Frank is the author of the nonfiction books The Mad Feast: An Ecstatic Tour Through America’s Food, Preparing the Ghost: An Essay Concerning the Giant Squid and Its First Photographer, Pot Farm, and Barolo, the poetry books The Morrow Plots, Warranty in Zulu, and Sagittarius Agitprop, and two chapbooks. He teaches at Northern Michigan University, where he is the Nonfiction Editor of Passages North. This winter, he tempered his gin with two droplets (per 750ml) of tincture of odiferous whitefish liver. For health.

I couldn’t help but notice in your bio that you “designed multiple degustation menus for Julia Roberts’s private parties in Taos, New Mexico.” That’s amazing. How did that experience, or other experiences, impact your writing of THE MAD FEAST?

Well, I’ve had a lot of strange food-related jobs—ice cream truck driver in Chicago, edible grasshopper trapper in Oaxaca, Mexico, wine cantina floor-mopper in Barolo, Italy—all of which served as research, however unintentional, for The Mad Feast. I spent over 15 years working in restaurant kitchens, from fast food chicken shacks to fine-dining lines. In the fine-dining world, we crews of chefs and would-be chefs often fancied ourselves twitchy artists, gustatory composers, epicurean poets. At the ends of our shifts, before blitzing ourselves out at the bars toward some brief sleep, we often challenged ourselves to take two seemingly dissimilar ingredients and, via playful experimentation, uncover a third ingredient that would seamlessly bridge the original two. Usually, in order to foster that edible “connective tissue,” we had to manipulate the texture and/or temperature of that “bridge” ingredient. In this way, we found that a cucumber granita could be the bridge between a raw oyster and pink peppercorn brittle; that garam masala syrup perfectly bridges poached venison loin and a dehydrated sour orange rind tuile. When properly combined, the flavors would twine, and offer the illusion—however complex— of a singularity in the mouth. In The Mad Feast, I feel as if I were drawing on a similar imaginative alchemy in order to connect a particular food to a particular state to the shadowy back-alleys of regional history, in order to yield a larger statement (however inconclusive) on the ways in which we have come to eat what we eat, where we eat it.
What was your research process like for TMF? Did it differ in terms of approach from your research for your other incredible book, PREPARING THE GHOST?

First of all, thank you for your niceness! Much of the research conducted for TMF was unintentional, as I mentioned earlier. I started working in restaurants when I was eleven, washing dishes in that fast-food chicken on the outskirts of Chicago. I started keeping a journal, which persisted throughout my restaurant work years—just a quotidian record of my life and its silly ornaments. As such, I thought a lot about food over the years, touched a lot of food, caressed it, manipulated it, changed its chemistry, physically massaged a lot of food, extracted—with a series of very sharp knives—parts of food from a whole, ever chronicling, however inadvertently, how my relationship to food evolved. I left home at age seventeen, and bummed around the U.S. picking up restaurant work along the way, apprenticing in a series of kitchens, learning how to prepare regional specialties. In this way, I was able to live in many of the U.S. states for a number of years or months. And, when intentionally researching TMF, I visited the states I did not live in. The intentional research involved a seemingly endless series of interviews, trips to local archives and attractions and fairs and homes and restaurants and museums and factories and historical societies. Race tracks. Former leper colonies. Roadkill cook-offs. Bowling ball plants. I spent much of the time on the road alone, sitting in a particular place, observing and ruminating; letting the place work on me. Watching obvious things like birds and bugs, trees and clouds, and wondering how all of this stuff was conversing.
Preparing the Ghost began after I saw the first-ever photograph taken of the giant squid hanging in the Smithsonian National Museum of Natural History. I scribbled down the three-line caption beneath it, and when I got home, I turned to Google. I discovered that, in 1874, when Newfoundland Reverend Moses Harvey secured and photographed, for the first time, an intact specimen of the giant squid, he finally rescued the beast from the realm of mythology and proved its existence, forever altering the ways in which we engaged the construct of the sea monster (via the lenses of literature, art, science, religion, et. al.). To take the photo, Harvey transported the squid from one bay to another, and then to his home where he proceeded to drape it over his bathtub’s curtain rod so its full size could be displayed. I became obsessed with tracing the logistics of Harvey’s undertaking and connecting said logistics to the peculiarities of Harvey’s personal life. I expected to get a 2,500-word essay out of it, and then 500 pages later, I found that I had about 200 pages to cut. To flesh out the story behind the photograph, I researched the various aspects of 19th century Newfoundland that influenced Harvey and his journey from bay to bathtub and beyond. Such aspects include, but are not limited to, the period fishing equipment, politics, religious practices, and Harvey family history that informed and contextualized Moses Harvey’s obsessions. I conducted my research in conjunction with Joan Ritcey, head archivist at the Memorial University Libraries and Centre for Newfoundland Studies (the Promised Land for those seeking information about Moses Harvey and the giant squid), and Moses Harvey’s great-granddaughter (!). Eventually, I hit a wall in the writing process and had to light out for Newfoundland in order to conduct on-site research, get drunk with Harvey’s descendants, and immerse myself in what the filmmaker Werner Herzog sometimes controversially refers to as “the voodoo of location.” It was my hope that in coupling such research with lyrical meditations on the nature(s) of mythology, I may also uncover, through inquisition and analysis, a larger statement about our (occasionally monstrous) human need to mythologize.

In this vein, how did you start writing, and start getting interested in the topics of these two books in particular?

I remember in 5th grade collaborating with my friend Ryan Shpritz on a series of gross-out stories called “Death at Dark” (I, II, III, and so on). Mrs. Buccheim, our English teacher, was so excited that these two boys were writing extracurricularly that she allowed us to read our work in front of the class each week. As such, in order to satisfy the expectations of our peers, Ryan and I felt a pressure to ratchet up the intensity of each subsequent installment, which, to us at that age, meant ratcheting up the gruesomeness. Once, in Death at Dark part IX, I think, some serial murderer forced his victim’s hand into a garbage disposal before killing him, and we compared the resulting carnage to something like “a punctured egg yolk dripping from his ruined wrist.” Shannon Elliott, the cheerleader on whom I had a mad crush, started crying. After that, Mrs. Buccheim, put a stop to our public readings, which at first made me really sad, you know? My first real writerly rejection! By my own English teacher (not to mention Shannon), no less! But eventually, I sensed something infectious, and even addictive in this sort of rejection. Writing not only had the power to reveal, but the power to get one banned; the ability not only to confirm expectations, but also to agitate them.

What are you working on now?

I’m working on a book-length essay about pigeons; pigeons and their role in global diamond smuggling. I’m still in the making-a-mess stage of drafting, but I’m guessing it will resemble something like Blood Diamonds bumping-and-grinding with the Audubon Field Guides.

I more believe in sea creatures, and land monsters.