Our 2016 Fiction Prize is open until October 31! While you’re preparing to submit, read our interview with 2015 winner, Simon Han, selected by Laura van den Berg. Here, he discusses his winning story, “Be Tanly,” the short story writers who inspire him, his current project, and advice for 2015 Fiction Prize entrants. Simon’s story will appear in our 38.2 Winter 2016 issue. 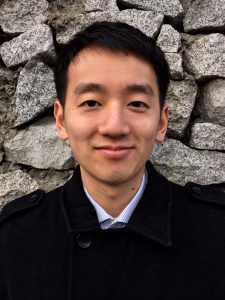 Simon Han was born in Tianjin, China, and
grew up in Dallas. His stories have appeared or will appear in Guernica, West Branch, Narrative, and The Texas Observer. He received his MFA from Vanderbilt University and will begin a 2017-2018 Tulsa Artist Fellowship in January.

1. Although “the City” remains unnamed, it looms large in the story, colored by the elaborate stories Ba tells about his time there. What made you decide to set your story in and against such a landscape?

I didn’t name the City because it belongs to the narrator. For most of the story, he has to do this really freighted thing, which is to imagine the reality of a place he’s never been to. As a writer I’m interested in that process. I mean, imagination isn’t this pure, boundless act: it’s biased, subjective, and colored by experience, even in fiction. Of course it’s also healthy, necessary, beautiful, empathetic, etc., but when you forget about imagination’s limits, you get something like Lionel Shriver’s speech at the Brisbane Writers Festival. So for me, the City is a manifestation of imagination’s limits. The narrator constructs it out of stories, mythologies, TV, and other secondhand sources. He constructs it out of desire and longing. The story is told from his perspective, so I wanted the reader to see the setting as it exists in his mind.

2. ”I thought of Mama watching TV over my snail shell back. For a child who wrote poetry, I’d failed utterly then in imagining a life for her apart from the living room couch. A trip to the City changed all that. ” One thing I really admire about the story is how surprised I ultimately am by the characters, especially Mama, who turns the tables on Ba. What was the process like, discovering the characters?

Oh, I was hoping the point of view allowed for some surprise. The narrator’s limited imagination extends to people too, even his mother. He has to reckon with the fact that his mother had a life before him. He doesn’t think that much about what she’s doing when she’s not in the living room with him. I tried to imagine beyond the narrator’s perspective, to see the characters living in separate places and times simultaneously, and to get that on the page without getting it in the narrator’s head. That’s where readers of earlier drafts were especially helpful, calling out the broad stokes and biases and points where my imagination constrained the characters. I have seventeen drafts saved on my laptop, but there were more.

3. What short stories have inspired you lately?

John Keene was one of my first writing teachers, and his story “Rivers” in Counternarratives does the crucial and heartbreaking work of imagining a life for Jim outside of the constraints of Adventures of Huckleberry Finn. I also just finished Valeria Luselli’s Story of My Teeth — it’s a novel but filled with these incredible auctioneer’s sales pitches that could be super entertaining short stories.

4. What projects are you working on now?

I’m working on a novel about a paranoid, sleepwalking family living in a sleepy Texas suburb. And more stories, I hope!

5. What advice do you have for people submitting to this year’s Fiction Prize?

Not sure, to be honest. I think I landed at the right draft with the right readers. And I’m so thankful for that. And lucky. Submit something you’ve convinced yourself is finished and forget you submitted it.