It was like watching the moon wane,
her child crawling toward me,
like watching a field go up at night
in hay fire, small tufts
embering and fast-moving
toward the forest, humid smoke
dimming the clogged sky.
This lack of oxygen, a gasp, unbreathing.
If the child had stopped, I would not have leaned
down and picked her body up. If the girl’s small frame
was less red, less milk fed, less whole
I would not have rested her against
my shoulder, curved against my breast
in an imitation of nourishment.
My task was to hold her head, to support
the neck, to not upset—the instinct
was to coo. I know nothing of how
to pacify fearsome creatures. One hand out,
one at the base of her gossamer spine. Cobwebs,
paddocks, bales. The tongue peeked out
from the mouth. Smoke, pointed warmth,
the body’s heat matched mine even in its smallness.
Holding another woman’s child was like spanning an underworld,
a foreign atmosphere, no breath, yet some sweet
moment of discovery, and vapor, and heat,
and a suffocating end like water.

I stop at the message from my sister
Telling me she is scared of helicopters.
O lazy fly. O long winter. O the boat
They found him in. As I get near the park, taking off my sweater
I remember how cool it was.
I pass a statue in the park of ducklings
Lined up behind their mother. Someone has shot the bees out of my hair.
I know what a bomb in a crowd sounds like. Yellow buzzing
And the eiderdown against the boom. O the boat
They found him in. O the helicopter’s lazy fly.
O the full backpack. O the sugared blood.
Here is the new death, a goose
Beneath the wheel on the car ride back.

Nora Sullivan is a Junior at Emory University, studying Creative 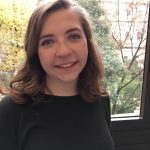 Writing and Political Science. She is the Senior Writing Editor forAlloy Literary Magazine and an editor for The Lullwater Review. Her work has appeared in The Claremont Review, Alloy, and The Pulse Anthology. Nora Sullivan lives in Beverly, Massachusetts.