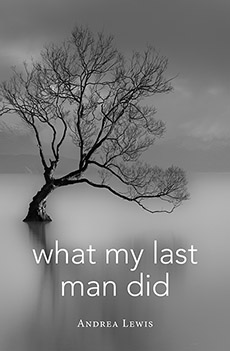 What My Last Man Did won the Indiana Review / IU Press 2016 Blue Light Books Prize and is forthcoming from IU Press in March 2017. Read excerpts from two of Andrea’s short stories below, and pre-order your copy from IU Press today.

From “Straight Next Time”

The storm built with breathtaking speed. Darkness fell and then, in a disconcerting turnabout, the skies lightened again as mountains of liquid-silver clouds sped in from the southeast. The first raindrops hit the front windows like bullets hurled one by one from the bulked gray sky. That changed all at once to what seemed like barrels of water, one after another, being splashed against the building. The first lightning strike was much closer than I anticipated, illumining the hotel grounds not like daylight, but something much starker. In the second burst of lightning, we saw the phantasmal form of Christophe struggling across the sand-grass in the downpour. The manager tried to stop the dripping child from entering the lobby, so Juliette set down her glass and ran to meet him. “Christophe, why have you not gone home?”

His thick hair clung to his forehead and streamed water into his eyes. He blinked furiously, his lashes flinging droplets. “Madame, you must come. You must.”

From “The Empire Pool”

The vaulted ceiling of Wembley Stadium was almost lost in the bright silver light that streamed through banks of windows high above tiered galleries. Row upon row of spectators fanned themselves with programs that flashed blue white blue white. In the centre of it all, the Empire Pool was a flat turquoise rectangle. At one end, a tower of iron scaffolding supported the diving boards and platforms.

As we entered, Ramiro took my hand––a simple gesture that evoked sensations for me as vast as the stadium itself, as if I had saved the world and now it was laid at my feet for me to enjoy. Oh, there was guilt too. Another part of me felt like a little girl playing hooky. But how quickly I allowed Ramiro––his tailored suit, his warm hand––to bestow upon me his unfamiliar brand of confidence. Maybe this was how all Americans felt as they went about ordering butter and consuming beefsteak and rescuing nations.

Rodney, who had brought the silent Nicky along, kept sneaking me knowing grins and quick V-for-Victory signs. He was taking all the credit for prying me away from my meeting and pushing me into Ramiro’s magic sphere. And it was magic, the way Ramiro produced passes from his slim leather wallet so that the four of us––Ramiro, Rodney, Nicky, and I––sat like the royal family in a row of seats behind the judges for the diving competition.

Joaquín Capilla Pérez, who that day would win a bronze medal for Mexico in the ten-meter platform dive, paced alongside the pool. He noticed Ramiro on one of his nervous crossings and smiled at him. Capilla Pérez was twenty-five years old, but looked like a teenager. His pointy shoulders angled out above his slender waist and red swim trunks. His taut brown back was a triangle of confined energy. Before his event, he joined the other divers in the pool for their two minutes of acclimation, treading water or swimming a few strokes.

Ramiro put his arm round my shoulders and spoke directly into my ear. “Joaquin noticed you,” he said. “He’s wondering why I am here with such a stunning Englishwoman.”

I shook my head and tried not to smile. As far as I could tell, Mr. Capilla Pérez had not looked at me at all.