The landlord takes one look at the monster and says: I can’t do anything about that.

I found it yesterday, Helen says. She feels like nudging it with her foot or something, but she’s still worried it’s mad about last night. She had come home from her temp job and sat on the floor with an afghan and drank a six-pack on an empty stomach and watched eight hours of People’s Court, and then unsteadily made her way into the kitchen galley where the monster had appeared and almost tripped over it. Look, she says, Can’t you write this up under pest removal or something?

Shit, says the landlord. He is too old for this job, which is only something Helen knows because he says it every time she asks him to fix something. She thinks this is why he always wears the same greasy sweatshirt, so when she tells him the water’s out, he can shake his head like he does not have enough outfits to deal with this problem. She wants to tell him that she also does not have enough sweatshirts and even more than that, does not know how to fix her own sink, but each time he just tries to look sadder and older until she quietly calls her younger cousin to come in from Queens.

Is it possible it was here when you moved in? the landlord asks hopefully.

Helen crosses her arms. Her hoodie is almost as greasy as the landlord’s this time, and her skin feels crawly every time she runs into the Chinese-food-and-beer stains that make it obvious what’s sustained her for the last three weeks. Don’t fuck with me, man, she says, but she’s too tired to sound really threatening. She’s missed the rent enough for him to know she doesn’t have enough money for legal action.

The landlord shrugs at her. I’d have to look through some paperwork, he says. You know, if it’s sentient, there could be a lot of problems. I don’t want any protestors around here.

I think protestors have enough on their plate, Helen says, but the landlord is already heading to the door. He has to lean back to open it. It sticks, he says, frowning at her.

I sent in a form two months ago, Helen says.

Oh. The landlord sticks his hands in the pockets of his sweatshirt. I’m getting too old for this job, he says.

He leaves Helen to contemplate the monster. It’s less of an entire monster than a giant eye-like orb with a purple glow surrounding it. She assumes it was lower to the floor last night when she banged her shins into it, but now it floats a few feet off of the ground, bobbing occasionally. I guess we’re stuck with each other, Helen says. The monster hums like a computer that doesn’t want to start up. Okay, says Helen. Try not to be too weird. I’m going to bed.

Helen hasn’t slept this well in months. The monster’s hum is soothing like a strange sort of rain.

Johnny comes over after work most days. Helen washes her sheets before he comes just so they’ll be straight out of the dryer, and she puts them in a big pile on the floor for them to lie on and smoke. Today, once she’s high, it’s all she can talk about. It’s like a cocoon, she tells him. I’m going to be a butterfly when I come out. Monarch. I like all the colors, the way it’s like stained glass in some fancy church, you know?

Butterflies come from chrysalises, says Johnny. You’re going to be a goddamn moth. His eyes are twitching today. He asks, Why’s that got to be so creepy?

The monster is swiveled away from the kitchen wall today, so it looks like the eye is staring. Helen isn’t sure it has the sense of sight, but she’s okay with the idea. I kinda like it, she says. It’s comforting.

Johnny snorts at her. You’re high, he tells her.

Kiss me, baby, Helen says. He likes it when she calls him that, acts like she needs him. She puts her hand on his chest for extra reassurance.

It feels like it’s watching me, Johnny complains. Even so, he pulls her onto him. It’s time for you to get a couch, he says.

The sheets are getting cooler and cooler around them. The monster maybe watches, maybe doesn’t. Helen wishes the monster was one of those on-fire ones, because recently, the cold has been in her bones.

Johnny puts his hand over her mouth, and Helen thinks about biting it. He says, I like it better when you don’t talk.

The temp job is all about licking envelopes. They didn’t tell her that at the agency, but they didn’t ask her why she was wearing a sweatshirt in June over her work clothes, either. Helen is starting to realize that it’s not a very good agency, but finding another at this point would be too much work.

In an hour, Helen’s mouth is dry and cracking. The rest of the day is spent in increments: twenty minutes licking and folding, twenty minutes to the water cooler on the second floor. Once there is a thirty-minute search for stamps, because the woman who showed her around at the beginning of the week has conveniently disappeared and Helen is too afraid to knock on office doors to find her. You should grab some coffee from downstairs, says the temp next to her. It’s overpriced, but hey, it works.

I’m off caffeine, Helen lies. Johnny begged her last twenty off her last night, saying that he always took the train over to her place and his card was out of money. The monster buzzed extra loud when he asked, and Helen wondered if it knew he was lying, too. He took the bus to her general neighborhood and then walked a few blocks. Also he had a job doing construction that was especially steady in the summer, whereas she was licking envelopes for what she suspected was under minimum wage.

She gave him the twenty anyway. She was probably going to make rent this month, at least. That was something.

The woman comes around again at the end of the week. It looks like we over hired, she tells Helen. We’re not going to need you the rest of the month like we thought.

Did I do anything wrong? Helen asks. She wants to say that she needs this money, and can the woman please fire the guy who has the four dollars for coffee every morning? But she just folds her arms up in her sweatshirt and tries not to shake.

No, of course not, says the woman. But Helen must stand there for too long, because she adds: Well, the other temps did get at least 10% more work done. But we really did hire too many of you.

Helen gets home and drinks a bottle of wine that she stole from a dinner party hosted by one of Johnny’s business-school cousins. It still has the yellow sale sticker on the neck, and she doesn’t think it tastes like it’s supposed to, but she doesn’t care. She stuffs her comforter into the dryer along with her sheets and watches them spin and spin.

Good night, she says to the monster. You’re not going to fire me, are you?

The monster hums a little louder tonight, a nice Mmm noise that sounds like a radiator. Helen falls asleep on the kitchen floor. She doesn’t question it when she wakes up, but somehow, her sheets are still dry and warm.

The next time Johnny comes over, he brings her a broken nose. They’re in the kitchen when it happens, Helen up on the counter and Johnny bracing himself against her thighs. The monster bobs behind them, and Johnny has his fist in her hair. She thinks he’s going to say something romantic, but instead, he tells her: You need a shower.

There’s a minute, and then Helen says, You’re an asshole, you know that?

The monster looks more like an eye than ever, and Helen is sure suddenly that it watches, listens. The surrounding purple haze is deeper now, the dark blood of a blackberry bitten into. It’s okay, Helen wants to tell it. I’m okay. But Johnny is holding her hair tighter now, and her bones feel like they’re going to shake out of her body, just become a skeleton and dance on their own.

Oh, I’m an asshole, am I? Johnny asks. Helen doesn’t like the look of his smile. He says, Who gives a shit. You know you like it.

I want you to leave, Helen says. She’s tired of this, but hopefully not so tired that she doesn’t sound like she means it. She says: Get out of my house.

Johnny twists the fist he has in her hair so it’s right against her scalp. Helen has always thought that was a place where you should be able to hear a heartbeat. Fine, he says. I’ll be an asshole.

He slams her face into the cabinet so hard that Helen sees stars. At the same time, the kitchen explodes in color, dark, blackberry-juice purple that carries warmth in its wake. Johnny steps back, stunned, and slams his back into the monster.

It is humming at him, and this time, Helen knows that he understands it.

The blood is still sticky on Helen’s face, still warm. The landlord is standing next to her in the kitchen, eyes darting back and forth between them: Helen, bruised, with bare feet and a sweatshirt tied around her waist. The monster, purple and pulsing.

It’s been long enough, Helen says. You’re going to get rid of it now.

Look, says the landlord. We talked about this before.

Helen looks at him. She knows she makes a gruesome portrait. You’re going to do your job, she tells him. I’ll even withdraw the complaint about the door. Fix that myself.

He looks skeptically at the monster. All right, he finally says. I’ll be back tomorrow with the equipment. You home around five?

Sure, Helen says. I can make that.

It gives her time to say goodbye.

Helen doesn’t sleep that night, though she knows she could if she wanted to. She sits on the kitchen counter, legs crossed beneath her, sometimes tracing her nail over the flakes of dried blood she missed when cleaning the tile. The monster is humming pleasantly again, like the dryer turning her clothes over and over.

Mmm, says the monster at one point in the night.

I know, says Helen. There is no other way to say it. She says it again: I know.

In the morning, she unfolds herself and steps down onto the kitchen floor. She places her palm flat against the monster’s side.

Its skin is cool against the warmth of her hand. 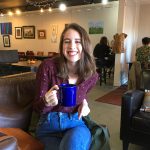 Meg Matthias is a poetry and prose writer from Indianapolis, Indiana whose work has been published in Rookie as well as in on-campus literary magazines Inklings Arts & Letters and Happy Captive Magazine. When not in class, she is writing about girlhood, anxiety, and the body. She is an only child, but asks that you not hold it against her.