I adore Grimes, a self-taught indie musician who I saw live before I knew who she was. I was seventeen and had bought tickets to see Lana Del Rey at Klipsch Music Center with my friend, Eric. I only bought the tickets because I knew Eric liked her. I thought he was cool, with his long hair and surprisingly expansive knowledge of pop culture, and I wanted to spend more time with him. Maybe a week before the concert, I mentioned offhandedly that Lana’s opener was a cute Canadian synth-pop artist named Grimes.

“Are you kidding? I fucking love Grimes,” Eric exclaimed with wide eyes. We were sitting in the courtyard of our old high school eating lunch. I didn’t think Eric ate enough, so I would pack extra food to give to him. I thought he was humoring me, because I never fathomed that he would know an indie Canadian artist, and I expressed so. I shouldn’t have been surprised that just because I didn’t know Grimes at the time, Eric didn’t as well. He was a collector. He had shelves filled with records, CDs, books, and DVDs. He fascinated me and he always had since we had that middle school art class together. Eric was tall and all bones. It was like somebody took a normally proportioned person and stretched him out just a little too long. He shaved his head when he was sixteen and hadn’t cut it since. His blonde and wavy hair had just reached an overgrown stage where it kissed his angular shoulders. My mother once asked me if Eric was gay because “he’s just so pretty for a boy.” The ambiguity of his sexual orientation, along with his androgyny, had only increased over the years.

After I admitted that I didn’t know Grimes, Eric invited me over to his house on Fort Wayne Street, where we sat on his floor, watching music videos from Grimes’ album Visions. On his tiny TV, Grimes danced in the desert to her song “Genesis.” Her innocent blonde pigtails slowly swung back and forth, captivating me, as Brooke Candy stomped by in her large platform shoes and promiscuous metal suit. As the song progressed, Grimes shed the schoolgirl look and found herself in the desert wearing a black Snapback with “PUSSY” written across it, all while swinging around a Medieval flail. The scene shifted and her pure, pigtailed persona sat on a hay bale, while a snake slithered on her shoulders and Brooke ran her long, neon pink fingernails across Grimes’ forehead. Home and I know, playing the deck above. It’s always different, I am the one in love, Grimes repeated over and over until she blew out a torch and the music video abruptly ended.

I miss Eric’s old house—his mother’s house. The last night I was in that large white house, I left well after dark. Eric’s room was in boxes in preparation of moving to his father’s house for the summer before ultimately moving to Indianapolis for college. His mother, Mary Jo, walked into his room, where we were watching Doctor Who, and sat on Eric’s mattress on the floor. Her eyes were misty as she talked about her home of twelve years, the home she had lived in with her three children until, one by one, they all left. With her final child going to college, she decided to move to Florida, and she was set to leave the following week. I loved Mary Jo. I thought she was funny and clever. She had a thin, small body, much like Eric’s. Mary Jo ran marathons, though she confessed that she didn’t like them. She was a good woman who once let me eat Christmas brunch with her family before they left to spend the holidays with her extended family.

I told Mary Jo that my own mother had uprooted her life several times before I was born. She left her ex-husbands and moved to Phoenix with her kids, though my siblings eventually were sent back to Indiana. Jasmine wanted to finish high school in Goshen and moved in with a friend. Andy got into “trouble” in Phoenix (I never caught the details) and was sent home to his father’s in Gas City.  My mother’s most recent ex-husband, my father, followed her to Phoenix in pursuit of a second chance. He wore her down until she agreed to remarry him and they returned to Marion. I came a year later.

My mother loved music, and our house was often filled with Chicago or Genesis. The dense old trees would dance along in the wind to the horn lines in “25 or 6 to 4,” while the bombastic drums and asymmetrical time signature of “Dance on a Volcano” would crash through the horseshoe of a neighborhood we lived in. The music’s playing, the notes are right. Put your left foot first and move into the light. The edge of this hill is the edge of the world, and if you’re going to cross, you better start doing it right. Better start doing it right. I remember her playing “You Get What You Give” by the New Radicals while I bounced back and forth between the rockers placed on opposite sides of our tiny living room in Silver Lake. When I was young, I thought popular songs were ancient relics passed down from generation to generation. They were universal constants that had been around from the creation of time, since I had no sense of time before my existence. Adam and Eve roamed the Garden of Eden to the soundtrack of “Cotton-Eyed Joe,” while those poor T-Rexes tried, to no avail, to dance to the “Macarena.” I didn’t know that pop music evolved with time, and that someday “The Hamsterdance Song” and “I Like To Move It” would make way for whatever was next to come.

My Aunt Brenda used to take my cousin Josie and me to all-you-can-eat buffets in Marion when we were young. Aunt Brenda was a large, angry woman, whose eyes would widen and vocal chords would produce an “uhn-uhhhhhh” that I can no longer hear perfectly in my head when anyone said something she didn’t like. She would let us drink coffee when we were three and four years old, and she once condemned me for wanting to be an artist when I grew up, but she loved us fiercely the only way she knew how to. Aunt Brenda and I were at Ponderosa one night when “Sara Smile” came on over the dingy radio above us. Excitedly, I told Aunt Brenda that this song had my name in it.

“Those people are idiots,” Aunt Brenda remarked, referring to Hall & Oats, and that was that.

Besides that glimpse in middle school, Eric and I really met each other through our high school’s winter percussion ensemble. He was a talented vibraphone player and I was a saxophonist who wanted to live up to the legacy of the other saxophonists before me who picked up percussion as their secondary instrument. My first season, I struggled learning a new instrument among experienced percussionists. One rehearsal, when I was upset that I could not play a passage correctly, Eric told me that I was doing a great job. It felt like he was the only person who gave me some leeway on being musically behind everyone else, and I still appreciate that moment to this day. My second season, we played a Genesis show that included “Dance on a Volcano,” “Firth of Fifth,” “Entangled,” and “Los Endos.” My mother once told me that Genesis was her favorite band during the prog rock era, and the act of playing music she loved made me proud. I was resting on the floor one rehearsal, staring up at the ceiling, while our band director rehearsed the melody of “Entangled” with the bells and vibraphones. Their music box-sounding refrain was hauntingly beautiful, and I felt my throat catch as the lyrics ran through my mind. Well, if we can help you we will. You’re looking tired and ill. As I count backwards, your eyes become heavier still. Sleep, won’t you allow yourself fall? Nothing can hurt you at all. With your consent, I can experiment further still.

I don’t think music is something somebody must understand right away. As a young teenager, I listened to copious amounts of loud and angry music—Nirvana, Smashing Pumpkins, and Soundgarden—that could easily just be described as “noise” by anyone’s grandma. During those tumultuous pubescent years, Kurt Cobain was my messiah. I thought I was different and misunderstood, and his music reflected who I was (or at least who I wanted to be). One of the first times I found myself in Eric’s house, we lounged on the floor of his bedroom with the dark blue, sloppily painted popcorn walls—his bedroom on Fort Wayne Street—while he played Lana Del Rey’s album Ultraviolence. We sprawled out on the floor, heads on each other’s shoulders, feet pointing in opposite directions, while we listened to Lana in silence. Heaven is on Earth. I would do anything for you, babe. Blessed is this union, crying tears of gold like lemonade. Eric must have listened to this album a hundred times before this moment, but he was as transfixed as I was. I never knew that music that controlled, music that floated above my head instead of punching me in the face, could resonate within me deeper than “Dumb” by Nirvana ever could. That hour and ten minutes, in that house on Fort Wayne Street, next to that boy I barely knew, flipped a switch in my musical tastes, and in turn, who I was.

When I was eighteen years old, I visited Eric at his apartment in Indianapolis. Grimes’ album Art Angels had a midnight release and we stayed up to listen to it together. We sat on his oversized bean bag chair in his living room, my head on his shoulder. I longed for his aesthetic, of living in the city with plants hanging from the windows and shelves overflowing with records, CDs, books, and DVDs. By then, I had expanded my music library, per Eric’s recommendation, to include bands like Beach House and Pixx. They, like Grimes, gave me an ethereal, floating feeling of contentment. Their genres and styles more accurately portrayed the person I wanted to be—the person that I didn’t realize I was until I began listening to music with Eric. Together we sat there, in awe, as Grimes’ high-pitched vocals and synthesized beats filled the small room. And you’ll never get sad and you’ll never get sick and you’ll never get weak, we’re deep in the belly of the beat, yeah. 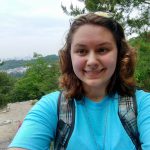 Sara Perkins is an undergrad at the University of Indianapolis, majoring in professional writing with minors in creative writing and art. A friend once told her that she is the level of hipster he someday wished to achieve, and she thinks of that every time she huffs essential oils or eats tree bark. She has been published in or has forthcoming work in Etchings, Indiana’s Best Emerging Poets, Young Adult Review Network, and Tributaries.