Last night I lay splayed across your bed half-dressed (half-dead). You were out the window, fishing for the screen. I was too drunk to say “be careful” when you announced you’d made it onto the roof. And then there you were, head and torso in the window, grinning drunk and accomplished, the screen in hand. So cute. I wanted to kiss you, to at least reflect that miraculous smile. Instead I watched—glassy-eyed, slack-mouthed—then picked up the bowl, burped out more bile.

There were two—maybe three—boys who (briefly) made me believe happiness was for me.

When we lie—you beside me, me beside you—I wish to tell you a story, something beautiful, something transformative—

“You sound so wistful when you say this stuff,” said one of those boys once, as he drew me close. “Why the whisper?”

I scorned myself for acting such a cliché.

Somewhere in our consciousness we were aware. Aware that something sad, something bad, had occurred in that house. It was common knowledge among the adults and probably had they the option, they would not have chosen to live in the shadow of such misfortune, but it was a lower-middle-class neighborhood, full of young families who hadn’t the means to be disturbed by such a presence.

And so, with no choice but acceptance, the property was rendered a sort of wonderland, a lot where the kids were sent to run off excess energy, where fathers collected dogwood flowers to feed our jarred caterpillars.

There was vomit on my coat, crusty and bitter, so you let me borrow one of yours. I stood in your closet, ran my hand across earth-toned flannels, navy sweaters.

Sometimes I feel like a hurricane, blowing in through cracks in boarded windows, reveling in destruction and sex, leaving you to scrape off spilled wax, gather used tissues, used condoms, wash the puke from your bedspread. God why would anyone stay for a hurricane?

I settled on a grey fleece which you approved of and now I’m staring at it hanging on the back of the chair and it’s reminding me that you didn’t kiss me this morning which I deemed logical since my mouth still tasted of last night’s vomit but still, what if it meant you’re done?

—A story that will make me believe it’s not impossible.

But I can only speak in fragments, half conceived notions, memories: shit that leaves us both asking “That’s it?”

(I’m always waiting for the salt-tinged moments where the trees blur and I ask “That’s it?”)

Sometimes I just burp bile, recall with listless determination the gaps in the hedge.

We’d weasel through, our little hands brushing aside wilting branches, pearled leaves stuck in our hair. With arms outstretched we’d gathered speed, tripping down the sunken lot. Grass quarterly-maintained would tickle our calves; feel how the breeze ripples, whips at your skin. We’d fly, spin, sink into the lapping lawn.

Give me your hand. Don’t be frightened; it’s only the haunted house. Here, it’s a pill bug, sow bug, roly-poly. We watch it mosey along then shrink at the hint of danger. We laugh and this time I’m not waiting. Here a caved in crawl space entails a wonderland and a boy doesn’t entail an ending. Maybe happiness is for me.

But I never told you that. Instead I just got drunk. 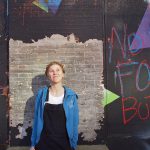 Born and raised literally on the University of Washington campus (such happens when a parent is a professor), Sophie Aanerud spent much of her youth musing over how to escape Seattle. In an unsurprising twist, she now attends the UW and loves it (though is still plotting her eventual flight). First plunging into books in childhood as a means of coping with Obsessive Compulsive Disorder, Aanerud soon after began crafting her own stories and discovered this to be her passion. Her journalistic and satirical work has also been published in the University of Washington’s newspaper, The Daily, and her college’s satirical paper, The Fishwrapper.