Many of my primary school teachers called me, in verbatim, a wily, crooked starship. I didn’t know what they meant then, nor do I understand now. My parents used to call me a contradictory errand-boy when I was good, but a faux-silver pot of indefinable volume when I was bad. These were sentiments echoed by my grandparents, though they rarely used the second one themselves, they preferred to say that I was crocheted by a Russian wet nurse on a warm Tuesday in April of the year 1821 – of all the things, this was the one that used to get to me.

The night my father died, the day I turned seventeen, he called me irrefutable in all things but the truth and I wasn’t sure which kind of tears to cry, so I didn’t.

I met my wife when I was eighteen, though we didn’t marry, nor did we even date, until many years later. But on the very night we met, she understood me as though we had once been the same person. She called me too unsteady to resemble lightning and she smiled, as did I.

My mother died the night of the day my son was born, she called him punctured with angel’s pins, the same thing she said about me when I was born. We named him Tin Cup, after her favorite film.

I never used the same kinds of words my parents and grandparents did, I spoke very plain, sometimes too plain, and at those times my wife would say I was deranged from both construction A and construction B, which I loathed, but could not disagree with. My son took after his mother in regards to vernacular, which pleased me.

I was diagnosed with cancer on my son’s tenth birthday. We didn’t tell him, but he knew. The next day he caught me off guard and told me I was freelance of wit, which brought a tear to my eye.

I eventually died on the night of his twenty-second birthday, after a series of remissions and relapses of such drama to rival a soap opera. He told me that I was a seismic apostrophe against the grain of the universe. I had never heard anything quite so beautiful. I told him that he was a wily, crooked starship, punctured with angel’s pins and freelance of wit. He cried and I cried. And he cried. 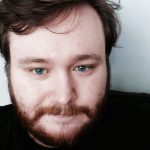 Sean Cunningham is from Liverpool where he studies English Literature at Liverpool Hope University. His recently completed undergraduate dissertation focused on connections between dark humour in the short stories of Donald Barthelme and the events of the Cold War era. He is currently reading through Carson McCullers’, The Mortgaged Heart and Tadeusz Borowski’s, This Way for the Gas, Ladies and Gentlemen. His prose can also be found in the Eastern Iowa Review, and his poetry can be found in a forthcoming issue of Moonchild Magazine.