David, who I’m sure is on to bigger and better things than teaching “Intro to Fiction Writing”, read us the end of Tobias Wolfe’s “Bullet in the Brain” in that special sincere and awed voice that writers save for reading the words of other writers: “for now Anders can still make time. Time for the shadows to lengthen on the grass, time for the tethered dog to bark at the flying ball, time for the boy in right field to smack his sweat-blackened mitt and softly chant, They is, they is, they is.”

It was the warm air, unreasonable in February, that sent me back to June during a summer where I’m at the P.H.A.C. baseball field in Dennison, Ohio. I’m showing Austin how to throw a curveball. Our friend Dick is behind the plate, wearing my sweat blackened catcher’s mitt and mismatched hand-me-down catcher’s gear. Back then, there is time for the shadows to lengthen on the grass, and we are all on the same P.O.N.Y. league team, and we are boys, and we are unafraid. The seams of the ball cut across my fingers. I simulated the full windup for Austin and said: “Snap your wrist as you bring your arm down, and follow through with your hips.” Austin was a natural athlete, a year older than Dick and I but the same grade in school, with a checkered history and poorly done tattoos on his forearm and abs. He was not a virgin; Dick and I both were.

He throws, snapping his wrist but not using his hips. The ball moves, but with no velocity. “Good movement,” I said, “But you have to put your hips into the pitch. You’re leaving it hanging.” I show him the motion again. We could do this until the streetlights came on and we would have to go home. The future to us does not yet exist, but has already been decided. Dick is to be a nurse, Austin and I are to be United States Marines, and we are all on the same P.O.N.Y. league team, and we are boys, and we are unafraid.

And a year later, Austin is dead and Dick and I have both quit baseball. And that January day he hung himself takes on a quiet reverence, and on that day I make sure to listen to a Rise Against song that was my favorite back when I wore a sweat blackened catcher’s mitt and held two fingers in front of my crotch to signal “Curveball”.

And six years after that, Dick is in nursing school and I am supposed to be learning to write from men and women like David.

The Cleveland Indians and Pittsburgh Pirates used to play exhibitions at the P.H.A.C. because it was halfway between Pittsburgh and Cleveland. They would have rode trains to the Dennison Depot, just a few blocks away from the field, to get there. We walked from home, bats and gloves slung over our shoulders, or on the handlebars of our bikes. The local P.O.N.Y. league teams play at the P.H.A.C. now. P.H.A.C. stands for “Panhandle Athletic Complex” and P.O.N.Y. stands for “Protect Our Nation’s Youth”. Baseball gets us off the pothole-lined streets I would later drive drunk, stoned, and snorting pain pills because my knees are shot and I cannot be a United States Marine.

And now, another year later, Austin is still dead and Dick and I still have both quit baseball. But I am still telling him to snap his wrist and follow through with his hips, and Dick is still to be a nurse, and he is still massaging dirt into my sweat blackened catcher’s mitt so it pops just so when the ball hits it while the shadows lengthen on that patch of unknown clay and grass where the Indians and Pirates used to play and we are, we are, we are. 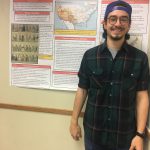 Cam Rentsch is a Chicano writer and undergraduate student at The Ohio State University studying Anthropology and English-Creative Writing. He can generally be found on publicly-owned wilderness, or on Instagram and Twitter @camrentsch. His work has previously appeared in Entropy Mag.