It starts with jubilance: swallowing a spider in her sleep. It starts
with failing insomniacs, a venus fly trap. When she wakes up
next to him: cotton-mouthed, dry eyed,
and the memory of a tongue.
There is a dove that eats arachnids and the mossy,
molasses-laden nature of a bug (more so, is a dove
carnivorous
like a plant bringing its jaws over flesh and blood?)
Silkworm bedsheet threads, she wakes him up
and asks if he kissed her while sleeping. He tells her “No,
but the dissent of a web is woven in your teeth.”

She’s never seen Canadian geese swimming in salt water.
Maybe migration patterns are fucked like how
he asks “You are drunk, though, are you?”
The bite of a horsefly, drawing blood
(like drinking moonshine, brackish along the shore).
Fresh-water birds swim like goths between the whitecaps.
“I figured you wouldn’t ask” she says.

In the memory of a kitchen: it starts with a roach
vacating the pantry, then the china cabinet. She puts an ear
to dead oak to listen for threads and termites.
“I think we’ll bury him under the peach tree”
she tells him over dinner. He kisses her
and pulls a rusted spade from the garage.

“Texas found this world” he picks a flower from a carrot plant
with petals hollowed in a pentagram
(by the last of the living moths,
fire ants fried under a magnifying glass) and hangs
the bed sheets up to dry. It ends with exultation:
“You’re kidding now,” she sighs, palms pruned from the soap.

She gets out of bed and walks to the bathroom, sallow-footed,
the dank earth of mulch season. They drink rose tea
like it’s perfume: it ends with eye drops
and listerine raining on a spider’s web. 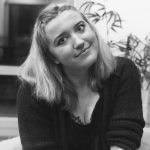 Audrey Lee is from Philadelphia, Pennsylvania and attends Franklin and Marshall College in Lancaster, Pennsylvania. She is the winner of the 2016 DeSales University Poetry Contest and her writing has been recognized by the Scholastic Art and Writing Awards and Columbia College of Chicago. She has attended the University of Virginia Young Writers Workshop, Ithaca College Writers Institute, and University of Iowa Young Writers Studio. Her work has been featured in or is forthcoming from The Sierra Nevada Review, Rookie Magazine, DIALOGIST, Half Mystic Journal, and Teen Vogue. Audrey has interned at Apiary Magazine and you can find at audreymorganlee.weebly.com.