The small-town grocery store my mother
and I shop at has more pine trees around it
than cars in its parking lot. Inside,
the speckled linoleum floor is marred

with the imprints of locally bought boots—
it’s been years since someone from headquarters
has gone out of their way to make
renovations in these parts. The deli counter

sports the fingerprints of people
who press the glass too hard when pointing
at the ham they want. My mother, wanting
to practice her English with the workers,

orders for us. Unlike most foods,
the names of ham don’t drastically change
when said in English. Chorizo is spelt chorizo
just like prosciutto is spelt prosciutto.

But there are too few types of hams provided
by the bespectacled lady behind the counter.
In the most meticulous pronunciation
I’ve ever heard her use, my mother asks,

Do you have any York ham?—a mainstay
in the United Kingdom. The lady says,
What? Can you say that again, squinting
through her oily glasses. My mother,

York ham, do you have York ham?
I can tell from the look on her face
that she is frustrated with the lady.
I glance at the name of the most pink

and bland ham I could find and say,
Virginia ham please. The lady nods
and in the same motion grabs the squishy
block of pork and begins slicing.

My mother turns to me, ¿Lo dije bien
por qué no me entiende si lo dije bien?
And I thought in reply, why didn’t she
understand you if you said it right?

I held her hand and told her, Ellos
no son de nuestro mundo. 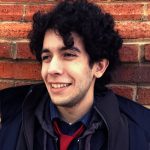 Alejandro Lemus-Gomez was born in Miami, the son of Cuban exiles, and now lives in the rural Appalachian Mountains. He is the 2017 recipient of the Rhina P. Espaillat Award from West Chester University and the 2018 winner of the Agnes Scott Writers’ Festival Contest in poetry. He studies English and philosophy at Young Harris College in North Georgia. His poetry is forthcoming in storySouth, Reunion: The Dallas Review, and other journals.