Indiana Review is accepting submissions to the 1/2 K Prize until August 15, 2018. Final judges Bryan Borland and Seth Pennington will select a winner to receive $1000 and publication. Essence London, who shares Arkansas with them as home, asks them to talk a bit about writers they love and collaboration and refreshing images. Though they are in conversation here primarily as editors, know too that they are writers and that you can find their latest work on their respective websites: bryanborland.com and sethpennington.com.

ESSENCE LONDON: To give our submitters an idea of the kind of work that “disturbs and enraptures,” the Sibling Rivalry Press tagline, tell us who you’d like to invite to an intimate writers’ dinner–dead or alive, from anywhere in the world?

BB & SP: In all its forms, collaboration requires a special kind of listening, this brilliant blend of confidence (to allow your work to stand next to another) and vulnerability (to allow your work to be changed by another’s presence). When you learn to do this, you’re using all the tools at your disposal, be they good friends who give you honest feedback, classmates, teachers, or those authors you read whose work resonates in your head. Collaboration creates a bridge to some other possibility. Sometimes you need a nudge, or a full-on push, to cross that bridge.

It’s also important to understand that no project exists in a vacuum. Even when you’re working alone, when you open the windows and allow the voices that carried you to this point come inside to whirl around the room, to push you, to challenge that last line you wrote, or to pull you into the next, you’re opening yourself up to collaboration.

BB & SP: We have a strong fall lineup. We have new chapbooks from Allison Joseph (Corporal Muse) and Ruben Quesada (Revelations). We have new poetry full-lengths from Robert Siek (We Go Seasonal), Stephen S. Mills (Not Everything Thrown Starts a Revolution), and Collin Kelley (Midnight in a Perfect World). We’re reissuing Nickole Brown’s first book, Sister. Finally, we’re launching the Arkansas Queer Poet Series, which recognizes LGBTQ-identified poets with an Arkansas connection. Randi M. Romo’s Othered is the first book in this series.

EL: For fun, take a shot at the IR Twitter contest: #GIF Us What You Got. In 280 characters or less, create a story or poem and illustrate it with a GIF. 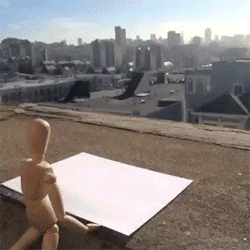 Someone called the police/ and the fire department/ on the boy straddling the edge/ of the hotel roof./ Silly world./ He wasn’t thinking of jumping./ He’d made a paper airplane/ and wanted to see it fly.

EL: What’s the most refreshing image you’ve encountered recently? It can be from literature or another genre of art, but if you have examples from your lives as well, please share!

BB & SP: We’ve been reading a lot of Jim Harrison lately—Letters to Yesenin, Dead Man’s Float, and Saving Daylight—and then with the passing of Anthony Bourdain, we rewatched the episode of Parts Unknown that features him. The episode ends with Harrison’s poem “Barking” and the beautiful lines, “Yesterday I got a call from the outside / world but I said no in thunder. / I was a dog on a short chain / and now there’s no chain.” At that exact moment, thunder rushed our house, one of Harrison’s favorite sounds. The sky was beating with the sound of him. He was with us, no doubt, then, and he let us know it. Those kind of things, those impossible things, have happened often to us.

Bryan Borland is founding publisher of Sibling Rivalry Press. He is author of DIG (Stillhouse Press), which was a finalist for the Lambda Literary Award in Gay Poetry and a Stonewall Honor Book in Literature as selected by the American Library Association. He is a Lambda Fellow in Poetry and a recipient of the Judith A. Markowitz Emerging Writer Award. He lives in Arkansas with his husband, poet Seth Pennington.

Seth Pennington is Editor-in-Chief at Sibling Rivalry Press and is author of Tertulia. He was Editor of Assaracus and Poetry Editor of Equinox, the literary magazine of University of Arkansas-Little Rock, and has been honored as co-editor of Joy Exhaustible by the American Library Association and by the Rare Books and Special Collections Division of the Library of Congress for his editorial, layout, and design work with SRP. He lives in Little Rock, Arkansas, with his husband, Bryan Borland.