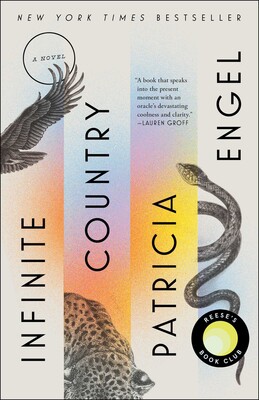 There are some moments that are so wrought with potential, they exist for eternity. In Infinite Country, Patricia Engel travels through and between these moments as they’re experienced by the five members of a family divided between Colombia and America, carefully uncovering the details of their lives one era at a time and guiding the reader through the overlapping stories and mythologies that have led them to the present moment.

Two young parents, Mauro and Elena, move to the United States with their first daughter to try to create a life away from the violence they witnessed growing up in Colombia. Years later, after they have two more children, Mauro is deported, and Elena sends their youngest daughter, Talia, back so that he and Elena’s mother can care for her. The histories of Mauro and Elena—their childhoods and early life together in Colombia, their relationships with Elena’s mother, their efforts to carve out a safe and stable way to live in the United States, and the eventual separation imposed upon them—are interwoven with the story of Talia, now a teenager, who has escaped a juvenile correctional facility and is trying to make her way to Bogotá to catch a flight to the United States.

Engel’s writing reveals present realities with a starkness that only comes from understanding them completely—and from understanding the circumstances that have led to them, fraught as they are with love, care, guilt, blame, and colonial violence. Fateful decisions can sometimes be represented as single moments, crossroads between two clear paths, but Infinite Country dissects this myth and lives in the surrounding realities that these moments create. The paths are never clear, and even long before and long after the moment that feels decisive—a hug goodbye, the boarding of a plane, the selling of a house—the circumstances informing that moment bring anticipation, hope, regret, connection, and distance that remain with the characters forever and shape their lives. Engel also recognizes how some big decisions aren’t marked by single moments at all; sometimes they’re made simply by our allowing time to pass.

In a moment of reunion, Karina, the eldest daughter, reflects: “I didn’t know how long they’d be like this, but it didn’t matter; I already felt the moment become eternal.” Amid a vast journey marked with insecurity, in which the only source of consistency sometimes feels like the family’s search for consistency itself, Engel writes her characters and their lives in a way that recognizes the permanence of their love for one another. She joins their power with the eternity of figures from Andean mythology, and with the primordial presence of the land itself. The result is a propulsive exploration through time and personhood, spanning generations in a way that feels both intimate and critically clear.

Laura Dzubay is an MFA candidate in fiction at Indiana University. Her work has previously appeared in Electric Literature, Blue Earth Review, Cimarron Review, and elsewhere, and you can find her on Twitter @lauradzu. In addition to writing, she loves good food, hiking, and haunted places.