“My film is not about Vietnam. It is Vietnam.”

Bruce is yelling about how good the sushi is, how it cost him $300 for the platter and how he can not believe the “shit” I’ve decided to pull right now.

I tell him it’s not shit. I tell him I’m fine with eating sushi, even a yucky eel roll, but that I can not eat it like he wants me to.

“Christ, Angie,” he says, then places his hand on top of his head. His eyes roll.

I breathe in deeply.

Bruce gets up from his director’s chair. He’s a pretty nondescript guy. Some days he’ll wear glasses. Today he’s got on contacts. His eyes are grayish and his hair is sandy brown. He’s in his late-thirties with a medium build. He looks so average, has such unremarkable, unmemorable features, that I often joke with him that he should rob a bank, be a full-time criminal because nobody could possibly remember what he looked like. What would they say to the sketch artist or the cops working the line-up? They’d say he was a white guy and not get much beyond that. Bruce is like electrical wiring. There but not seen. It’s hard to think anyone so “invisible” could be dangerous. Even now, as he’s picking up an M-16 whose barrel looks bigger and longer than I remember.

“What about this?” he says, holding it towards me. “You ready for this?”

And I reply in a voice calculated to be so nonchalant that it fools everyone, even myself:

These were the times to fear. We were already falling. And had been. What we wanted were purple slugs, a slime to sing to. Give us the pretty girls, the pretty boys, the little child dead and mossy at the bottom of the well. Our hands against the stones were pounding, were pounding and bloody palmed. Look at us, at the bottom of the false wooden bottom, playing a joke on Mom. Look at her face, twisted with terror. But such was the age of us. We with our sunburned cheeks, with our frostbitten toes. We didn’t care if they fell off. We wanted them to. We begged for it: Please, please, God of the Toes, take ours as sacrifice and bring us a field of moist corn stalks and pig shit. In the apple orchard the sticks stung like meanies. We unzipped ourselves and climbed the stout trunks. I had an apple in my hand and it was bruising as I threw it, the air pushing its skin in. Yours was a rotten one, already bruised and flying apart in the apple leaves, depositing its brown and mushy flesh in splatters. This was the way we came and Mom was in the gravel road crying and we laughed at her. We laughed and we laughed at her silly poor-person jacket and we laughed at her face, and at her silly tears. 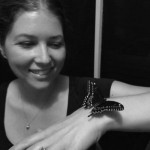 Rebecca Lehmann is the author of Between the Crackups (Salt, 2011). Her poems are published or forthcoming in Fence, Ploughshares, Boston Review, and other journals. She teaches creative writing at SUNY Potsdam.

I had my own little bedroom at Darla and Lincoln’s place, but usually I fell asleep on the couch where I watched movies long after they had gone to bed. The first month I worked at the Video House, I took home three, sometimes four, movies every shift. I must have thought somehow I could forget my own story. More often than not, I’d wake up when the credits were rolling on the last movie, and then I couldn’t fall back to sleep. Lincoln always turned off the air conditioner at night to save on electricity, so I would walk outside where there was at least a breeze. END_OF_DOCUMENT_TOKEN_TO_BE_REPLACED

This year IR is excited to partner with IU Press to award our first annual Blue Light Book Prize to an outstanding short story collection! Submissions open December 1, 2015. Check out our guidelines for more details.

In preparation for Blue Light Book submissions, our senior IR staff reflected on the short story collections they’re most thankful for this holiday season. END_OF_DOCUMENT_TOKEN_TO_BE_REPLACED

I used to bury plum pits between houses. Buried
bits of wire there too. Used to bury matches
but nothing ever burned and nothing ever thrived
so I set fire to a mattress, disassembled a stereo,
attacked flies with a water pistol, and drowned ants
in perfume. I pierced my eyebrow, inserted
a stainless steel bar, traded that for a scar in a melee, pressed
tongue to nipple in a well-lit parking lot, swerved
into traffic while unbuttoning my shirt—
There is a woman
waiting for me to marry her or forget her name
forever—whichever loosens the ribbons from her hair.
I fill the bathtub for an enemy, lick the earlobe
of my nemesis. I try to dance like firelight
without setting anyone ablaze. I am leaning over
the railing of a bridge, seeing my face shimmer
on the river below—it’s everywhere now—
Look for me
in scattered windshield beneath an overpass,
on the sculpture of a man with metal skin grafts,
in patterns on mud-draggled wood, feathers
circling leaves in rainwater—look. Even the blade
of a knife holds my quickly fading likeness
while I run out of ways to say I am here.

Jamaal May is the author of Hum (Alice James Books, 2013) and The Big Book of Exit Strategies (Alice James Books, 2016). Hum received several honors including a Lannan Foundation grant and American Library Association’s Notable Book Award. Other honors include a Spirit of Detroit Award, the Wood Prize from POETRY, and a fellowship from the Civitella Ranieri Foundation in Italy. Jamaal’s poetry explores the spaces between opposites to render a sonically rich argument for the interconnectivity of people as well as the worlds they inhabit. From Hamtramck and Detroit he co-directs Organic Weapon Arts with Tarfia Faizullah.