In Which I Play the Runaway by Rochelle Hurt (Barrow Street Press, 2016)

Rochelle Hurt’s second poetry collection, In Which I Play the Runaway, does more than summon narratives of origin and growth—the poems command another language with a new alphabet of “boxcar beats,” of fluorescence, linoleum, of living inside “this hissing kettle of a house.” In impossibly small spaces, Hurt demands the creation of another sight, reckoning with the speaker’s unflinching desires.

The book layers itself with self-portraits in which the speaker imagines herself as something else. The images build upon one another until it almost becomes too much, yet the poems pace themselves accordingly. In “Poem in Which I Play the Cheat,” the speaker tells us about the origins of her love. She asks us to

“understand before it began before that—

Sun as first love: when I was small”

“What I mean is that I fall in love with surfaces.”

I am stunned by how these stories accumulate to form an expansive landscape of the self. I read this collection when I was traveling, and even though these poems spread across various locales, the central voice does not waver through its changes, growths, and revelations. Hurt’s poetry has the power to transform a constrained space into one of power. For example, “Halfhearted,” one of the collection’s prose breaks, ends with this:

“But here’s where I got a break: on the seventh day of each week I lived in the pit of myself. Houseless, husbandless, I slept outside, balanced on a rock—tough, whole, unable to be consumed by any desire. On those nights I was happy.”

In Which I Play the Runaway begins with a “last chance” and ends with “honesty” Through this journey, the self is made resilient, each time more complicated than before. Hurt converts the impossible into a real possibility and in so doing, makes the truth undeniable. This collection is a must for anyone thinking of transcendent landscapes and the intense making of the self.

Indiana Review is proud to announce the winner of our 2017 #IRDarlings Twitter Contest! We received some great tweets and after careful deliberation we chose one winner who will receive an IR prize pack and free entry to our 2017 Poetry Prize.

Join us in congratulating the winner, E. B. Schnepp!

Thank you to everyone who participated! Make sure to submit your polished poetry to our 2017 Poetry Prize by April 15th, 2017!

Alicia Wright is originally from Georgia and has received fellowships from the Iowa Writers‘ Workshop. Poems appear in The Literary Review, Southern Humanities Review, The Southeast Review, and New South as the winner of their 2015 New Writing Contest, among others. At present, she lives and teaches in Iowa City, and this fall she will begin a PhD in Literature and Creative Writing at the University of Denver.

END_OF_DOCUMENT_TOKEN_TO_BE_REPLACED

Indiana Review is proud to announce the winner of our 2017 #BLB2017 Haiku Twitter Contest! We received numerous haikus, and after careful deliberation we chose one winner who will receive an IR prize pack and free entry to our 2017 Blue Light Books Prize!

Join us in congratulating the winner, Mike Ponta!

Thank you to all the participants! Be sure ready your best poetry manuscripts and submit to our 2017 Blue Light Books Prize by February 15, 2017! 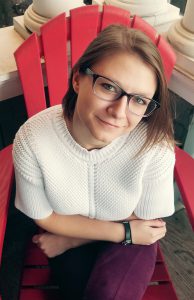