A friend calls me crying, again, and, wanting to describe
her taste in men, I look up poor vs. bad. Language
is changing, the internet declares. The rules don’t hold.
It’s a poor and a bad time to be dating, I tell her.

A questionnaire asks how many nights a week do I have
difficulty falling asleep. Five nights is labeled as Always.
Those two extra nights in the ether. Nights that would
nudge always toward infinity, spin out into some other

ineffable arsenal. When the therapist asked why I stopped
cutting myself, I told him vanity. The multiple choice
wavering inside my forehead, good enough. The options
on the questionnaire so perfect in their circles, making

time eerily check-offable. Like when I see the man
in the hardware store, who, years ago a boy, told me
to take my pants off as he drove me home, and,
because I was young and in love with my body

for the last time, I did. I tell my friend to be patient.
Before we had words for the days of the week, humans
still were touching each other, holding each other’s faces
between their hands, lifting their eyes up to the stars,

which will never be loosened from language, for us,
so much a part of the body that we almost, now,
forget it. Maybe I stopped sleeping with scissors
out of boredom. Maybe it was that each person

pausing beside me in the paint aisle I checked off
as Better. That two lost nights might separate Better
from Best, and what’s beyond that? What happens
when you choose something, someone, because,

for two nights a week, it could be worse? If my ass were
never bare on the leather for that man, buying a ladder
right there in front of me, then maybe I wouldn’t be still
shivering next to boxes of sharp objects, trying to decide.

Emily Corwin (Poetry Editor): Corey Van Landingham is one of the coolest, smartest voices in contemporary poetry. I read her collection, Antidote last autumn and it swept me up. “Quotidian” is a gorgeous piece, exploring matters of friendship, sex and romance, self-harm, wellness. Van Landingham interrogates here what a “good” life traditionally looks like, about what it could look like. This poem leaves me unsettled in the best of ways.

Corey Van Landingham is the author of Antidote, winner of the 2012 Ohio State

University Press/The Journal Award in Poetry. A recipient of a 2017 National Endowment for the Arts Fellowship and a Wallace Stegner Fellowship from Stanford University, her work has appeared in Best American Poetry 2014, Boston Review, and The New Yorker, among many other places. She is currently a doctoral student in English Literature and Creative Writing at the University of Cincinnati.

Listen to her read the poem here. 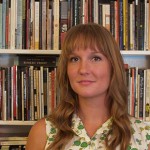 Corey Van Landingham is the author of Antidote, winner of the 2012 The Ohio State University Press/The Journal Award in Poetry. A former Wallace Stegner Poetry Fellow at Stanford University, her poems have appeared or are forthcoming in AGNI, The Best American Poetry 2014, Kenyon Review, The Southern Review, and elsewhere. In Fall 2015, she will join Gettysburg College as the 2015-2016 Emerging Writer Lecturer.