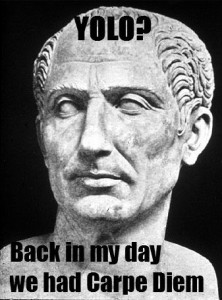 I recently came across an online comic titled “Great Literature Helps Us See Just How Lame Internet Slang Is.” The strip pokes fun at the poor grammar and strange phrasings of ‘tumblr-speak’ and the like, comparing slang with the prose of canonical writers such as Shakespeare, Robert Frost, and J.D. Salinger.

The comic illustrates what some view as a deterioration of the English language. For example, many people have been annoyed at some point by the flash fire spread of phrases like “YOLO” that take the place of meaningfully expressing the idea behind them or others’ failure to learn the difference between ‘your’ and ‘you’re.’ The comic raises valid questions: When people can so easily communicate by using popular slang and stock phrasing, why go to all the trouble of giving thoughts elegance through a fresh choice of words? What implications does this have for the world of literature?

What this view fails to take into account, perhaps, is what makes a language so useful and powerful (for literature as well as daily use): its ability to evolve to help us continue to communicate clearly and effectively. The internet, while propagating certain kinds of language, also allows English to adapt to a modern world. An article by the BBC at the end of 2012 commented on the phenomenon of fusions of other languages and English appearing due to the Internet. Hinglish (Hindi/Punjabi/Urdu/English), Spanglish (Spanish/English), and Konglish (Korean/English), among others, show that the Internet is doing more than just providing a forum for new memes. Some of these new hybrid languages, according to the article, are creating new meanings for words that already exist or shifting the way grammar uses those words. Through the Internet, English is growing steadily more flavorful.

It is easy to forget how much a language changes over the course of time. Anyone who’s tried to read Chaucer, however, quickly realizes that modern English has shifted quite a bit from its roots. So while the Internet might not be producing new Shakespeares in every forum, the English language is far from broken. The universal community of the Internet might be expanding our definitions and augmenting our vocabulary in more complex ways than we appreciate yet.

What do you think: Is the Internet having a detrimental or beneficial effect on English? Leave a comment below.

Lauren Conkling is the current Publicity Intern of Indiana Review.