That was the period when our daughter
would come crying into our bedroom
whenever the grackles began mating on the roof.
It isn’t hurting them, my wife would say,

birds have tiny penises. Then two cats would
find their way into our bushes and start howling
like their skin was being peeled off. Oh, our daughter
with the endless tears. I brought my wife wine

every night for a week, hoping I’d arrange for us a son.
The cats aren’t killing each other, sweetness,
said my wife’s purple lips, it’s just that all male cats,
not just the wild ones, have barbs on their penises.

What what what, sobbed my daughter, is a penis?
A son, a son, a son, I thought, as I held my wife
at the hips, both of us on the floor to avoid hitting
the wall with our bed; our daughter had cried herself

into unconsciousness, and maybe I was sure
she wouldn’t hear when I yelled my way farther
into my wife, my mouth still in a “son” shape.
Our daughter woke herself up with a howl

she didn’t know the reason for, and my wife
turned back at me with several reasons to scowl
texturing her red face. We were covered
when our daughter came in, tears and snot

curling her hair against her cheeks. It’s ok, lovely,
my wife said I was just on the floor looking
for something and I was caught by a tiny barb.
I took it out, and now I’m going to go to sleep. 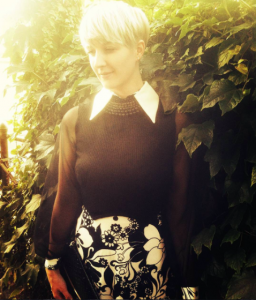 Hannah Gamble is the author of Your Invitation to a Modest Breakfast (Fence Books, 2012), selected by Bernadette Mayer for the 2011 National Poetry Series. She has performed her work at the Pitchfork music festival, the Chicago Art Institute, The Chicago MCA, and as part of the Clark Street Bridge arts series in association with FCB Global.

Gamble’s poems have appeared in American Poetry Review, POETRY, The Believer, jubilat, and Pleiades, and she has written for the Poetry Foundation, the Poetry Society of America, and the culture magazine Fanzine. In 2014, Gamble was awarded a Ruth Lilly and Dorothy Sargent Rosenberg Poetry fellowship from the Poetry Foundation.

She lives in Chicago.