when you could still smell the green on me

back when your looking old was new

we ran to the dark churchyard
and under God’s empty bell.

The dimmed silver held us in its huddle.

It was colder than moon.

Together we pushed its great weight up
but nothing.

Its round rim could only mouth mother
to the night.

A lark then.
An absent cloud.

The bell with its tonsil out.

The three of us unable to make a sound.

Emily Corwin (Poetry Editor):  I have always loved the attention to music and the fresh imagery in Stacy Gnall’s work, particularly in “Trespass.” This poem embodies Gnall’s magic, the spell-like quality of lines such as “It was colder than moon/…Its round rim could only mouth mother to the night.” There is such tenderness in this poem, tenderness beneath the dark churchyard and God’s empty bell—a closeness with the mother, for whom the poem is dedicated, the mother who trespasses in the churchyard, who raises the bell with her daughter.

Stacy Gnall is the author of Heart First into the Forest 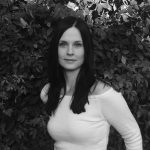 (Alice James Books, 2011). She holds a Ph.D. in Creative Writing and Literature from the University of Southern California and is also a graduate of the University of Alabama’s MFA program in Creative Writing and Sarah Lawrence College. Her most recent poems are either published or forthcoming from Colorado Review, New American Writing, Crazyhorse, and Another Chicago Magazine.