Not quite one, two, three consecutive days of frost
Foretell the beginnings of the Dying Season. To commemorate, a child colors her      doll a shade of suffocation.

Two pairs of shoes, two socks
Will be added by that third, but not yet ready to let go.

Six monster dolls, seven monster trucks
Will ride the meat of their fingers, womb-ridged by scales, tired by little.

Three little beds so close to the living
Will handle as much death as the sickbed, downstairs; these children, so close to      birth, are not done with dying yet.

Millions of glow-in-the-dark suns
Will flow from a lava lamp, brighter than any single aspiring star could, yet it will      be supernovas deep into the graveyard shift that will light slack jaws.

Countless topless markers, dried out pens,
Will hide in under-bed altars, prostitutes of provision smelling of aged incense,      and pray for their patron child’s salvation. But all infancies, still, are prophesized      crosses to bear.

One Minnie hat to peacock feathers
Will become a Mardi Gras goddess, miniature upon a child’s brow, fed sparkles      bright as beads of alcohol, naked on the neck, tangy on the tongue. She will      dream, in vain, of fattening on rotted flesh and childish thoughts.

Timeless, television
With the dreams of the dying, that pale blue will splash across pale cherubic faces      like an ocean of indecision precise in every lung-fill.
But not yet those dreams—those dreams!
Keep them at bay, dark screen in the cold night.

The Dying Season is upon us.
To commemorate, not quite one, two, three pairs of cold feet cross dark wood floor, three children lying on one bed to stave off the cold forever.

Anastasia McCray is the daughter of a military family, the second 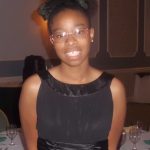 oldest of six children. She was born in Augusta, Georgia, though most of her childhood was spent moving around with her two brothers closest in age, from Tucson, Arizona to Wurzburg, Germany. Throughout Anastasia’s life, she has always been fascinated with stories and writing. She drew inspiration from the world around her, filling poetry with personal experiences or social injustices. Anastasia found new inspiration when her youngest three siblings were born, and she wrote the piece, “Two Blankees and a Pillow,” about the fear of the first few years of life for the families of children prone to sickness. Currently, she attends Agnes Scott College and is pursuing a degree in Public Health with Anthropology and English minors.